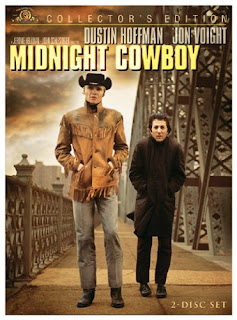 For some reason, I wasn't expecting Midnight Cowboy to be very good. I honestly don't know where I got that idea from, but it's one that stuck, and eventually I think I mainly just watched it for Dustin Hoffman, my way of thinking being, if it involves Dustin Hoffman, it's literally impossible for it to be bad. That turned out to be true, but not just because of Hoffman, but just for the entire film really- there was so much that I liked about it that it would almost be easier to just shove a copy of it in your hands and go 'just watch it, because I liked ALL THE PARTS'. But I'll try and review it because it's what I do!

So Midnight Cowboy follows Joe Buck (Jon Voight), a naive cowboy (but not an actual cowboy) from Texas who wants to move to New York City because he hears that the rich ladies will pay a LOT to be... seen to by a nice young cowboy such as himself. At this point I was like 'so this is going to be a... SEX movie?' and was slightly apprehensive, but things don't turn out how either I, or Joe, expects them to. After failing a few times to get paid for sex, he runs into Ratso Rizzo (Hoffman), a conman who at first cons, but then befriends him, and gets him into living quarters that are fairly dismal, but better than the streets. From that time on, they're a couple of inseparable broke dudes, and that's basically what the film's about. NOT the gigolo thing, so much.

So I love the unlikely friendship thing, and I LOVE Dustin Hoffman (always), I didn't think I liked Jon Voight, but actually he was pretty cute, and Joe is such an adorable (albeit flawed) character that it's difficult not to like him. The most important thing about this movie though, I think, is the part it has to play in the cultural cultureness of the WORLD. That made a lot of sense, huh? What I mean is, you know when you watch a cartoon or a TV programme, and you know they're referencing something but you don't know what? And then you watch it again say a year later when you've seen other things, and suddenly a whole new world is opened up to you? Midnight Cowboy is totally one of those things that people reference, A LOT.

For example: You know that episode of Futurama where Zapp Brannigan gets fired (Zapp Brannigan is my FAVOURITE character in anything, in a total love-to-hate-him kind of way. He annoys me SO much, in a way that I think is just BRILLIANT. Just so you know) and eventually he and Kif get hired by Planet Express, but FIRST he dresses up like a cowboy and (sort of accidentally) pimps out Kif? 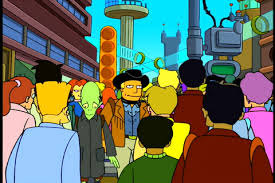 Totally a Midnight Cowboy reference (well, not even reference, really, just out and out parody) and now the world seems a tiny bit clearer to me! And if you've never seen Futurama (SHAME on you!) then that's ok because you know when people in things nearly get run over and go 'I'm WALKIN' here!'? That's from Midnight Cowboy too.

The other thing about Midnight Cowboy is that, even though I was watching it for the first time, I felt like I'd seen it all before. Part of which is that it's a big part of the whole cultural thing (I know there's a word for this and YET I absolutely can't think of it) but it makes Midnight Cowboy sometimes feel like it's sort of cliched, but actually, you have to remember that it came before that stuff was cliche. It is the originator of the cliches, if you will. (I probably wouldn't have recognised this as a feeling I had if it hadn't been for Alley's post about this in The Maltese Falcon. Have to be honest here.)

For example (again), it feels like the 'coming to New York and being broke as hell' storyline has been done, but this has to have been one of the first; and there is a scene in Midnight Cowboy of a totally weird and LSD inspired party that I swear is almost identical to a scene of a weird party that Peggy goes to in Mad Men, so much so that I actually thought 'Hey! They stole this!' but nope- Midnight Cowboy was the original, and actually when they made this, these kinds of parties were still happening, and that feels like a really exciting prospect, kind of documenting the times rather than looking back on them kind of critically.

Side note: Shame on you, Mad Men, for stealing a scene right out of Midnight Cowboy! Tsk.

But apart from being a big part of culture, Midnight Cowboy is genuinely a good film in it's own right. Obviously it's impossible for me to watch it as the people who saw it in the sixties did, but that's ok- the way it's become a part of other things only made me like it more, not less, and then on top of that, it turned out to be gritty and interesting and, eventually, really moving too. Obviously you need to see it, to make certain other things make sense, but I think you should want to see it to. Because it's really kind of great.
Posted by Laura at 08:00