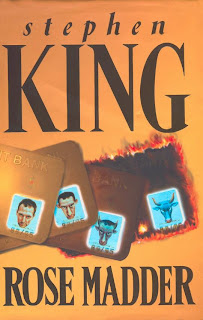 "It filled her eyes and her mind with the sort of clean revelatory excitement that belongs only to the works of art that deeply move us- the song that made us cry, the story that made us see the world clearly from another person's perspective, at least for awhile, the poem that made us glad to be alive, the dance that made us forget for a few minutes that someday we won't be."

The best thing about Rose Madder, I think, is the fact that now I'm done with it, I can blitz through quite a few Stephen Kings because I've read them before, and edge ever closer to finally, finally reading On Writing, (I literally only have one other new King book before it) and then onto the books that have been released since I started doing this whole thing, that DAMMIT I WANT TO READ SO BADLY. I realise this doesn't say much for Rose Madder though, and, well, we'll get to that.

So Rose Madder is a book that's part of Stephen King's whole 'women's rights' thing, which is something that I both appreciate him SO much for attempting, but which I also don't think he gets completely right, at any point. But still, total points for trying. In this tale of women's woe, Rose Daniels is a woman who has been constantly battered by her husband for 14 years, until one day, when she sees a spot of blood on her bedsheets she decides that she has to leave or he'll kill her. The fact that he'll also try to kill her if she leaves is something she considers too, but in the end the risk seems worth taking. So she escapes and it's all awesome and she starts to build a life that's all for herself in a city which King never names for no earthly reason, but which is clearly Chicago.

And I love all of this. Abused woman makes good, gets a job, meets the man of her dreams and so on and so on. But that's not all there is to it, and the rest of it... It ain't good. Firstly, the whole supernatural element is ridiculous, and not in a so-ridiculous-it's-good way, more in a

kind of way. All I'm going to say to you about that is PAINTING THAT COMES TO LIFE, and, well, this does not impress me unless it's in Mary Poppins.

And then the other thing that really got to me was that there are fairly large chunks of the book that are told from Rose's INSANE husband's perspective. And when I say insane, I really mean insane. Like, the dude is a psychopath. And interestingly enough, it wasn't that fun being inside his head. I mean, it made me actively uncomfortable, and I kind of didn't need it. And I don't think for a minute that this wasn't the effect that King was aiming for, but there were points in it where I sort of wanted to throw up because he thinks about really horrifying things, and, again, I just didn't need it.

But what I really didn't need from being inside his head were the bits where King kind of made us try to feel sorry for him. For this character who we meet when he beats his wife so hard that she has a miscarriage, for this rapist, this murderer, King tries to explain away his action by his dad abusing him when he was young. And I get that this is an actual reason for the actions of abusers, but what it isn't is an excuse, and I think it kind of sucked for King to make it seem like one, in any way. And, I'll say it again, I just didn't need to be inside his head at all! This book would have been fine without that, and it would have been way shorter too, which would have been good for it, frankly.

So. You could say that it's not one of my favourites. Would I say that I outright hated it? I wouldn't- I did love the 'woman escapes abusive husband, makes good' narrative, and if it had mostly stuck to that and I hadn't had to climb into said abusive husband's disgusting skin, I would have felt a lot better about it. So... An average to bad book? Yeah, let's go with that.
Posted by Laura at 08:00