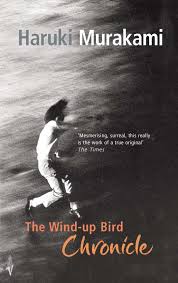 "The one thing I understood for sure was that I didn't understand a thing."

Ohhhh, Murakami. Just when I start to think that maybe, just maybe, I've reached the peak of my Murakami-love, I go and read the book that I'm now thinking of as his Murakami-est- the book that's the perfect distillation of all his favourite themes and ideas and his style, at once mind boggling and insane, but also kind of familiar at the same time? Or... Maybe that's just me.

I think it's going to be pretty pointless to try to describe the plot, because it's always pretty pointless to describe a Murakami plot in any way, but... I'll give it a try? I guess? It starts off, as always, fairly mundanely, focusing on Toru Okada (the narrator for most of the book) a recently unemployed young man with a wife and a house and many meals to make (so many meals... Mmmm, you and your food, Murakami...) who is very very much a typical Murakami hero- passive, quiet, lonely, VERY accepting of the weird things that happen, should I even go on..?

Anyway. Strange things start to happen after his and his wife's cat disappears, he meets not one, but two sets of very odd characters, they say cryptic things and a lot of people (or, at least, a lot more people than really should) sit in wells. I feel like I'm being flippant here, and I really don't mean to be, because I was TRANSFIXED by this book. It was like picking it up hypnotised me and each time I emerged from it, minutes or hours later, I could barely remember where I was. This is the highest praise I know how to give a book, really, and Murakami pretty much always does it for me.

This time, though, I wasn't just sucked into the book, the book kind of overspilled its boundaries and came with me everywhere I went. And I'm not talking about the physical book (THAT sucker is over 600 pages, so it didn't ACTUALLY come anywhere with me) but more the feel of the book, and the Murakaminess of feeling like, even though I was just walking along the same streets and everything, that maybe they had changed in some sinister and strange way, or maybe there was something or someone odd waiting just around the corner.

This sounds like a really weird and paranoid way to think, but it wasn't like that- and if you really think about it, the world actually is ripe with potential things that could happen but never do, and sometimes things feel like they've changed even though they haven't because you have changed, and I really think it's basic truths like this that Murakami tries to get to, through his weird and twisted narrative paths. I mean... that's only true sometimes, and I won't even to pretend to know what he's doing the rest of the time, but I think that really is A Thing that he does, and that's why I sometimes feel like people are crazy when they're like 'Murakami is haaaard' because really, he's just going deeply into things that mostly we just ignore, or take for granted.

I'm not even going to pretend that I enjoyed every single second of The Wind-Up Bird Chronicle, because there were some war history bits that, let's face it, I'm never going to be into, AND there were some downright unpleasant bits that I don't even want to think about ever again. If I'd wanted every single story to be neatly tied up, then I would have been sorely disappointed, but I don't expect that kind of normal crap from Murakami, and neither should you. I don't know what he means by most of it, but I have my own interpretations and my own thoughts, and maybe THAT is what it's all about in the end.

Or maybe it's all literal, and Murakami's seen some weird shit. How should I know? All I know is that, this has probably just taken the crown as my favourite Murakami so far, and that is a HOTLY contested title, let me tell you. This is awesome, you should read it. Although... Probably not if you're a Murakami first timer. Ease your way into the madness, huh?
Posted by Laura at 08:00