Look! I've bought top 5 TV out of retirement for my magical birthday week on ze blog! I've actually been percolating the idea for this list for a LONG time, but I only filled those magical last two spots on the list last week. It's going to be great!

I realise that vampires have been done TO DEATH (gettit? Because they're vampires) and everyone is basically over them, but that's when you're talking about the lamest of lame vampires. I want to talk about the coolest of cool vampires- the ones in True Blood, also known as 'That Programme With The Most Beautiful Cast on TV'. But not only do I want to do bad things with basically everyone in the show, I also want to laugh and cry and laugh some more at their WORDS. Words which I always assume are all supplied by Alan Ball as the head writer on the show*, but I guess some other people do some work sometimes, probably.

Anyway- the list! The residents of Bon Temps, Louisiana, sure do say a lot of crazy shit, but the following are the top five lines I wish I had the opportunity to use in my everyday life. For the sake of ease, though, let's just call them:

1. "That boy's cheese done slid right off his cracker."- I can't even remember who says this about the less-than-bright Jason Stackhouse, but I feel like it's the perfect thing to say whenever anyone does something that's completely mental. Also I kind of want cheese and crackers now.

I would describe this as a CHEESY grin/laugh. Gettit?
2. "You is Satan in a Sunday hat, boy."- Satan in a Sunday hat is mayyybe one of my favourite phrases that I've never been able to use in context. Because isn't it the perfect way of saying that something's too good to be true? That was the most rhetorical question ever.

Sometimes, Skarsgard wears hats.
3. "I'm bored. Take off your clothes."- Ok. It doesn't hurt that this is said to Eric. Northman. In fact, I think I mostly just want to say it to Skarsgard. But I feel like it would be nice to brandish that kind of power and ALSO say it after dramatically sweeping the pieces off a chess board. 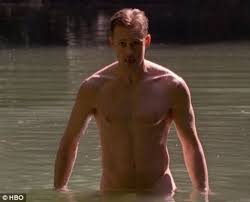 Oh no. No one would ever want *him* to take off his clothes...
4. "As we say in Surrey, SOD THE FUCK OFF YOU CUNTING TWAT!"- Just for the record- we don't say this in Surrey. But maaaaan, do I want to! It's just a stunning utilisation of ALL THE SWEARS, and kind of perversely pleases me. Did I say kind of? I meant, ENTIRELY.

5. "If you two are done eye-fucking, can we go?"- I don't really know if people actually stare each other down like dickheads in real life, but it's the kind of thing that happens all the time on tv, and the only appropriate response is to pretend that they fancy each other. This works even better if you're Eric Northman saying it, but that's true of everything.

Even when he's cross, he's beautiful.
You might consider this post to be an excuse for loads of Skarsgard gifs, and I resent that. There was an opportunity to use five, and I only used four! Also all of these quotes are magnificent and I would happily use them daily. Now to create some opportunities for that to happen...

*Well. Not anymore, actually. I'm concerned about the possibility that True Blood might go downhill now, but I'm also excited about what he might do next. Also I really need to watch Six Feet Under.
Posted by Laura at 08:00

Email ThisBlogThis!Share to TwitterShare to FacebookShare to Pinterest
Labels: Don't make me break out the Skarspeen gif, Swedish gods, Vampires are still cool but only if you pronounce it 'vampurs'