Devouring Books: Gone With The Wind by Margaret Mitchell 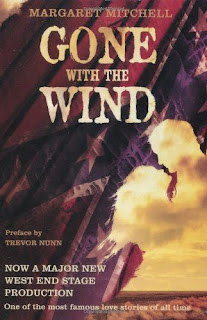 "'Life's under no obligation to give us what we expect. We take what we get and are thankful it's no worse than it is.'"

I've said this before when I've read giant books, and doubtless I'll say it again and again, but I don't know if it'll ever be truer than it is now: There's so much to say about Gone With The Wind that I don't even know where to begin. My history with the book and (especially) the film is long and filled with love and hate and over-analysis, and frankly there's too much of it for just one blog post. So, instead, I'll try and keep it (sort of) brief and hopefully get across just how truly excellent this book is.

First, my history- I first watched Gone With The Wind with Frances at Christmas 2007- it was the night before we were going home for the holidays and, logically, why wouldn't we watch a four hour long epic movie until 2am when I was being picked up at about 8.30am? Exactly. So we did and it was SO EXCELLENT (and I nearly smacked my mum for calling Melly a drip during the ride home. I mean, REALLY). Then, in the summer of 2008* I read Gone With The Wind and it is by far the best reading experience I can remember- AMAZING book, long warm days, with nothing to do but read and nowhere to go but my nan's garden to read in. It was something like this experience I was hoping to recapture by re-reading it this summer.

I think it's important for you to know that I both love and hate Scarlett O'Hara. This isn't the kind of thing where I can't make up my mind about her, it's that it's impossible to love her wholly when she's such a bitch, but it's also impossible to hate her because she's so bloody awesome. She's so tiny minded and unanalytical, shallow and often vapid and yet. She's also brave, pragmatic, strong and straightforward, and essentially the opposite of everything that she, as a 'Southern Lady', is supposed to be. In other words, she constantly challenges the conventions of the society in which she's been raised, and is capable of doing anything that a man can do, only usually she does it better. Do I almost want to call her a feminist icon? I almost do, you guys, I almost do.

"There was no one to tell Scarlett that her own personality, frighteningly vital though it was, was more attractive than any masquerade she might adopt. Had she been told, she would have been pleased but unbelieving. And the civilisation of which she was a part would have been unbelieving too, for at no time, before or since, had so low a premium been placed on feminine naturalness."

Alongside Scarlett, almost constantly, is her sister-in-law and secret enemy, Melanie Wilkes, who is married to Ashley, the man Scarlett thinks she's in love with because, um, he's really pretty? Oh, an rich and stuff too. Scarlett has good reasoning skills. Anyway, the point is that, although the relationship between Scarlett and Rhett is kind of seen as the big draw for Gone With The Wind (and kind of 1) The only thing I knew about it before I saw the film, and 2) The most misunderstood element of Gone With The Wind because this is love? REALLY?) maybe the most rewarding relationship for the reader is the one between Scarlett and Melly- a female friendship of necessity, at first, and constantly beset by jealousy on Scarlett's part, but one of unending loyalty and even, in the end, love.

But it's possible I just think that because I love Melly- I always place her in my brain right next to Beth from Little Women (Little Women being, of course, almost the other side of the civil war story of Gone With The Wind) as one of those female characters who are shy and quiet, weak in body but so incredibly strong in spirit and in love- both the love they give and how loved they are. Melanie is just so wonderful- just as Scarlett never lets anything beat her, Melly doesn't either but she manages to also retain her ability to be nice and giving to others, mainly because she actually does care about other people. She's essentially the kind of person who you know doesn't think much of themselves even though they're extraordinary, and as a result, people think all the more of her. Especially, I guess, me.


"Melanie had the face of a sheltered child who had never known anything but simplicity and kindness, truth and love, a child who had never looked upon hardness and evil and would not recognise them if she saw them. Because she had always been happy, she wanted everyone around her to be happy, or, at least, pleased with themselves. To this end, she always saw the best in everyone and remarked kindly upon it."

The fact that Rhett Butler refers to her as 'A great lady' doesn't hurt either, because if Melly isn't my favourite character (she definitely is) then Rhett is. And it's not just because he's incredibly handsome (he is) and it's not just because he sweeps Scarlett off her feet with a passion she has never known (he does, but only once and way later in the book than you'd expect but MY GOD it is totally hot) but because he's incredibly interesting as a character. A lot of what's interesting about him happens before the book, when he made the decision not to die in a duel to defend a lady's honour (she had to be defended against him, of course) because, in his words, 'I like to live.'

And in that, I decided that I understood his character better than anything because, having realised that he likes to live, and living according to the conventions of Southern society would have meant that he didn't get to do that anymore, he makes the logical decision not to give a shit about what anyone expects of him as a gentleman and I respect that so hard. This willingness to break with convention is also a big part of what makes him so perfect for Scarlett, even though she often tries to cling to the old conventions because they're what she knows and have always worked out well for her. And so she consistently and foolishly refuses to see how perfect he is for her because, like I said, she's not a deep thinker.

And those are basically the main characters (apart from Ashley, but we shan't talk about him because I hate him. Just picture him as someone who, like Rhett, also thinks Southern conventions are sort of stupid, but he still chooses to live by them because something something honour something) but fortunately for us all, the minor characters in Gone With The Wind? So awesome. Given that this is an epic novel in all the ways a novel can be epic, it leaves room for a vast array of characters, but that doesn't mean they have to be as well drawn and engaging as they really and truly are. Every single one of them feels like a real person, with a real history and a real life outside of the book, which I think is really a stunning achievement. My personal favourites are Mammy and Grandma Fontaine, but there's no one like Suellen when you need a character to hate. But seriously- the characters are SO good, and even when they're terrible they're good, and a lot of them are terrible a lot of the time.

Because, also, there's the slavery. Slavery is something it's impossible to ignore when you're reading Gone With The Wind, especially when the majority of characters hold alarming views on the subject. When you read Part One, it's difficult not to be aware that the whole party at Twelve Oaks can only happen because of the hard work of slaves (not that Mitchell makes you aware of this) and while the war is going on, it's difficult to grasp that they're fighting for the continuation of slavery. And then, once the war is lost (oops, SPOILER The South loses) and these characters we sort of like start joining the KKK it's like WHAT IS EVEN HAPPENING and WHY ARE YOU DOING THIS and it's difficult to even like them, let alone love them.

And yet, somehow I still do. Not all the time, but most of it, and I guess that's because you can love people even when some of their beliefs are kind of disgusting, especially when those people are also characters in a book and it's easier to compartmentalise the things they say and do. And the thing is, what Mitchell also does is set up her book so that she has characters who are slaves (and some of them are fully realised characters, not just stereotypes, particularly Mammy) who argue amongst themselves about whether freedom is a blessing or an insult. Because, in spite of the fact that slavery is so so SO wrong (seriously, I don't like slavery)** it's definitely an interesting perspective that, when a certain (evil) system has been in place for so long, people who are the most disadvantaged by that system want to keep it in place because it's what they've always known and, what's more, for some slaves, I guess being set free would have been like being kicked out of their family. Of COURSE they shouldn't have been there in the first place, but they are now and have been for all their lives, and they truly are loved. In her darkest hour, Scarlett wants to go home to Mammy, and that's sort of all you need to know about how much she values her.***

I don't know if all of that was just to justify my love for Gone With The Wind to myself or what, but either way, you know what? I love this book. I love it so hard and I love pretty much everything about it (questionable morals aside). I would probably go as far as to say that it's nearly a perfect book, because you know what? It makes me laugh and it makes me cry, I've been angry, frustrated, joyous, horrified and, um, passionate towards it. In common internet parlance, it made me feel all the feels, and I can't imagine a time when it won't do that to me. I know that I'll read it again and again in my life, and I urge you to do the same.

Now let us take to the comments and discuss all the things I missed out! Are you a secret Ashley lover? Do YOU think Melly is a drip? There's practically no end to the things I could discuss about this book, so let's DO THIS.

*A summer where I also read Harry Potter and Bag of Bones, making that 9 rereads this year so far from 2008 and apparently I read in 5 year cycles?
**Really and truly. And if any of this sounds like I am for slavery then I really need to change that because oh my GOD that is so not how I feel.
***Values, I guess being the operative word because she did LITERALLY own her. Ugh, this is such a difficult thing to talk about. And I guess it always should be.
Posted by Laura at 08:00