I think I sort of love Brit Marling...

Lovefilm is a tempestuous beast, and has been refusing to read my mind and send me the things I want of late. In a stunning twist of annoyingness, this month I had three films on high priority, and the one I really wanted to see was Smashed (it involves Aaron Paul and I needed a little Breaking Bad pick me up which I so don't need anymore because BREAKING BAD) so of course Lovefilm sent me the other two. Why these things can't just know exactly what I want at all times is just beyond me. Damn technology.

Fortunately, the other two movies I had on high priority were co-written by Brit Marling and also starred her awesome self. Remember when I went to see The East and could actually coherently talk about things other than Skarsnudity? It turns out that it wasn't just a fluke that a film co-written by and starring Brit Marling is really good, because these other two films (Sound of my Voice and Another Earth)? SO. GOOD. It's important to tell you that, after a close watching of all three of these films, I've determined that Brit likes to wear hoodies a fair bit, and also that (wait for it) she's awesome.

I'm doing two reviews in one here only because I have about a million book reviews to write (must stop reading...) and not because there isn't enough to discuss in each of them because OH MY GOD I could talk about Another Earth, especially, for DAYS. But then things get spoilery and people get sad and that's not cool, so instead I'll give you a little taster of each and make you REALLY want to see them, then we can discuss them in emails and whatnot. I know it sounds awesome.

Sound of my Voice 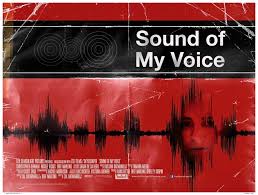 In the grand history of Brit Marling films, I feel like this one will be known as 'the other cult one'. Having only seen The East before I watched this, I was surprised at the unreal element to this (The East is very much grounded in reality), in that Marling plays a woman, Maggie, who claims to be from the future, and by surprised, I obviously mean delighted. The big draw of the story, then, is whether or not Maggie is who she says she is, and there is evidence presented both for and against the truth in what she tells us, although in the end it's up to the viewer what they believe.

And, you know what, it's gripping! It's kind of told through the eyes of Peter, who, with his girlfriend Lorna, has infiltrated this cult in order to expose it, only through doing so he gets sucked in more and more, as Lorna pulls away to the same degree. Watching their changing relationship would be interesting enough, but it's only one event in a big tableau of events in this film, and turns out not to be the most interesting. That, obviously, belongs to Maggie, and to the amazing (seriously) performance of Brit Marling who seamlessly can go from serene to furious in about 0.6 seconds. I can't even with this girl.

It also gets bonus points for involving a secret handshake that I desperately want to make everyone learn so we can do it whenever we meet: 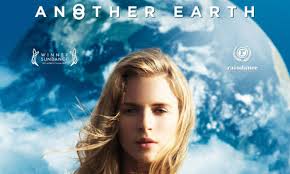 I liked Another Earth so much that I went straight to IMDb after I'd watched it to get more information about it because I couldn't bear that it was over. There wasn't much, but I went to the reviews and they were almost exactly as I would have predicted them to be- half of them called it a masterpiece of gloriousness, and so beautiful (it really is) and dramatic and sort of perfect. The other half more or less went 'sci-fi?! There weren't no lasers or aliens or nothing! They didn't even GO to Earth 2!'

And I see their point, BUT I am much more of a 'it's a masterpiece person' because you know what? I thought this might be a bit too sci-fi for me, but the sci-fi in this is actually used to move the plot along (well, and create the plot in the first place) rather than it being all there is to the film, and that apparently happens to be the perfect amount of sci-fi for me. This plot: Another planet is spotted in the solar system that appears to be an exact copy of Earth (hence, Earth 2) on the same night that Rhoda (Marling) finds out she got into MIT AND makes the moronic decision to drive home drunk. As a result of this, combined with looking up at Earth 2 (because, WOAH) she crashes into another car, killing a pregnant woman and her child, and leaving the dad in a coma. Four years later, she leaves prison, a different person and wanting to make amends to the dude who survived her actions and things develop from there.

It's just so amazing and clever and the deal with Earth 2 was EXACTLY the deal that I wanted it to be (I'm not saying more than that because I was both shocked and delighted when the thing happened) and THE END is so awesome I could have screamed but I didn't because everyone was sleeping. There were a lot of things I liked direction-wise- Rhoda wears her hood up and doesn't wash her hair and wears terrible clothes while she's still feeling guilty, but as she helps the man whose life she ruined more and more, she starts to wash her hair and generally take better care of herself because, I don't know, she feels like she deserves it more? It's all very subtle but gorgeous and I love it.

I also love the fact that Rhoda is SUCH a fully formed character, and also that she gives a shit about science, something which I can barely remember of any girl in any film, ever. After prison, Rhoda returns to her childhood bedroom and it's filled with science textbooks and models of the solar system and it's almost a shock to see a woman portrayed onscreen who is obsessed with a certain thing, even though, um, THAT IS SO A THING WE DO. Brit Marling has said that she started writing movies because she kept being offered terrible boring roles, and she really does so well at creating female characters (well, all her characters are good, really) who feel incredibly real.

So there. Brit Marling is awesome and makes bloody good films. I think it's also worth noting that both of these films are basically 90 minutes long, and they did more things to me than most directors manage in more than 2 hours. Things don't have to be long to be good (see also: Alice's thoughts on Love Story) although I would happily have watched another 10 hours of Another Earth. And I could STILL talk about it for days.
Posted by Laura at 08:00