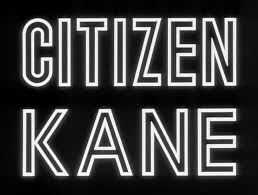 Citizen Kane is one of those films that everyone knows about but no one has really seen. I was no different- but then, as Lovefilm has a knack of doing, they sent me the film on my list that I had the least real desire to watch. I mean, when are you ever going to be in the mood for Citizen Kane? You add it to your list because you feel like you should watch it, but that doesn't mean that you ever actually want to. Plus, you have to set aside like a week for that shit, am I right?

I was not right. I was very very wrong. Firstly you don't need a whole week to watch it (obviously...) you just need a tiny bit under two hours and a functioning brain. I think it also helps to wipe all preconceptions (which, it has to be said, I basically got from The Simpsons and Friends) about it from your brain and just watch it as if, I don't know, it's 1941 and it's just come out and you've never seen anything like it before.

Because wow, Citizen Kane must have been so revolutionary in 1941. It starts SO weirdly (actually, it starts weirdly even by today's standards, to be fair) with a newsreel presented without explanation, announcing the death of Charles Foster Kane, and goes on for at least 10 minutes. I'm not going to lie, I did start thinking 'is the WHOLE film like this..?' and I was ready to give up BUT THEN everything got excellent, the newsreel was deemed 'not personal enough' and some dude was sent out to get the true story of Kane's life, based on his last word:

Now. I know what Rosebud is, you probably know what Rosebud is, and if there's one famous thing from Citizen Kane, it's Rosebud. It's probably a good thing, then, that the search for Rosebud isn't really what Citizen Kane is about at all- in fact, it's really just the premise for telling Kane's story through a wide range of viewpoints and always always in retrospect. I don't know enough about film history to say this, but the acclaim Citizen Kane always gets seems to suggest that this whole telling of a story from different viewpoints, with each picking up where the other left off (ish...) was not really anything that had ever been done before.*

And you know what? It's SO well done that it's strange to think that it was the first time such things were done**or maybe I'm really just responding to how modern it really felt- I honestly feel like it could be made today, and there's nothing anyone could do to really improve on it. I sort of loved it- the trawling back through the years and acquaintances to try and get the real story about one man's life, but never really getting there because the one person who really knows it all isn't around to ask, and who's to say he wouldn't put HIS own spin on it too? It's all just very very human.


"If you could have found out what Rosebud meant, I bet that would have explained everything."

"No, I don't think so; no. Mr. Kane was a man who got everything he wanted and then lost it. Maybe Rosebud was something he couldn't get, or something he lost. Anyway, it wouldn't have explained anything... I don't think any word can explain a man's life. No, I guess Rosebud is just a... a piece in a jigsaw puzzle. A missing piece."

It's just so right on, and true, and I feel like people can get hung up on last words and turning points and trying to analyse life, when the truth is, life isn't like that. Sometimes you can look back and see turning points, but hardly ever, and I doubt that anyone knows the one thing that's the key to the puzzle of their entire lives, or even if such a thing exists, ever. But then again, maybe people can and I'm too young to know about it, but really I think it's only something that we tell ourselves.

SPEAKING OF MY YOUTH: Did you know that "Orson Welles was just 25 when he directed, co-wrote, starred in, and produced this, his very first feature film"? I mean, isn't that just sickening? It's like the opposite of my love for Julia Child and her late start in life, but also, where do you go after making what's commonly regarded at the best film ever at 25? Complete madness.

Here's the bottom line about Citizen Kane- it's a film I was expecting to admire and appreciate, which I did, but, unexpectedly, I also enjoyed it. I just straight up enjoyed the viewing experience. I mean, who wouldn't want to watch a film about a the life and exploits of a media mogul who was also once just a little boy with a normal life who loved his mummy? NO ONE, that's who. In case you couldn't tell, I kind of recommend this film, and I especially recommend not only appreciating but actually enjoying it, too. It's the best way.

*OR it's all famous and acclaimed for other reasons. How should I know?
**Whatever those things may be. I don't know, stop asking me.
Posted by Laura at 22:31