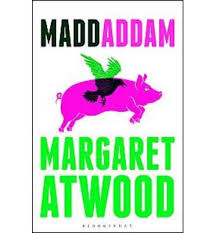 There was a time, earlier this year, where I may have said that Maddaddam was my most anticipated book of the year. And it was, because apparently I didn't know about Donna Tartt's new book (which I still haven't read, of course) but also just because, you know, Margaret is my homegirl and also I really liked Oryx and Crake AND The Year of the Flood when I read them last year. Maddaddam is the last of the Trilogy, and I was expecting great great things.

What I got was... Well. First of all, it's important to note that, no matter what else I say about it, this is still a Margaret Atwood book, and what that means is that, even when it's not so great, it's still better than most other books. She's a pretty awesome writer, you know? So the writing in Maddaddam is as fabulous as you'd expect*, the story, actually, is pretty solid, and interesting to a point, and that point was right where it became annoying for me.

To try and put this in any kind of context at all: I think that, when I finished the other two books of the trilogy, I was very much in a MOAR PLS kind of place, but obviously I had to wait a year (and a half, apparently) for this one, by which time I was a lot more like 'oh, is it time for this now? Well, ok then', because, you know, excitement fades. PLUS I got this out of the library after I'd paid to reserve it, and then neglected it for WEEKS until that troubling day that I think we all know where I tried to renew it and couldn't because someone else had reserved it so I had to read it reallyreally quickly and, well, that's never great.

BUT. In addition to the conditions of my reading it not being great, I had some problems with the book  itself (sorry, Mags). Some of these were because of my expectations of what I wanted it to be like- I kind wanted Maddaddam to focus entirely on the present, and the rebuilding of society and whatnot- which it did, to a certain extent, but there was also a lot set in the past which I really really think had been adequately covered in the previous two books. Or maybe it hadn't been, and I just can't remember why the past bits in this book were important, but either way, that kind of bugged me.

AND THEN- a lot of this book focused on the Crakers, the 'perfect' race that Crake sort of (whoops!) wiped out the majority of humanity for, and... They're SO ANNOYING. It's not really their fault- they were built in a lab and didn't really finish off their education or anything, but at the same time, it's difficult not to read about them and go REALLY? This is what was better?!** Their simplicity isn't so much endearing as irritating, and really it just makes them seem super simple. In a bad way. It's really not great.

And, much as I wasn't enjoying the bit that much, there's a whole CONFRONTATION bit towards the end (which is about the only interesting thing that happens in the present day story, honestly) which is really exciting, but just as it gets all juicy and interesting, the narration switches to a Craker which means that you get a simplistic and not at all dramatic retelling of events, at which point it was decided that this review was going to be pretty negative because DAMMIT, keep up the dramatic tension for the love of GOD, even if you can't meet any of my other expectations! DAMN BOOK.

I don't really know how to end this, because in spite of everything I've said, I did manage to read this in about 3 days (library fines can suck it) without any trouble, and I truly believe that if I'd read it straight after the other two, I would have had much more positive feelings towards it. But, at the same time, shouldn't all books be the kind of books you can read at any point and think that they're kind of the best thing ever?*** I think, really, what I want to say is this: You're going to want to read this if you read the other two books in the trilogy, but you're also going to want to read it before you get too many ideas about how you'd like it to end, because otherwise you might be sorely disappointed. Which pretty much sums up how I feel about it.


*You'd expect it if you read a lot of Atwood, that is. If not then, you know, you probably don't have any expectations of her. Carry on.
**A lot of which was Atwood making a point, so, you know, right on.
***That might be too much to ask of ALL books... But you know what I mean.
Posted by Laura at 08:30