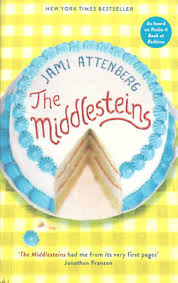 "No one was entitled to anything in this life, not the least of all love."

The Middlesteins is one of those books that I enjoyed plenty while I was reading it, but it hasn't lingered in the mind enough for me to really have much to say about it *notes sighs of relief that this is going to be short*. It's also the kind of book that I'd happily send on to anyone who wanted it, because I liked it but probably won't read it again, but I read it on my Kindle and probably shouldn't have even brought that up as an option. Whoops?

Anyway. The Middlesteins is basically a book about family, about a family, even (can you guess their surname?) and, honestly, it's a pretty accurate family. All viewpoints are taken into account, and everyone seems reasonable to themselves, which I think is really the way people are- we act the way we do because we're fairly convinced that it's the right thing to do, or just the only thing we can do, even though, to other people, it seems selfish, or awful, or some other bad thing.

So. Pretty much everyone in The Middlesteins is sympathetic, and even if you don't like them, you can still appreciate their point of view, and understand why they hold it. But what do their points of view all centre around, I hear you cry? Well, the matriarch of The Middlesteins, Edie, is addicted to food and essentially eating herself to death, her husband, Richard, has left her, and their children and child-in-law are left picking up the pieces, or trying to ignore that things are even in pieces.

And, I mean, that's pretty much it. This book relies very much on its characters, so it's fortunate that they're good and, more importantly, honest ones; and there are very much moments of comedy interspersed with all the worry and troubles that come along with being in a family (I found the daughter-in-law especially amusing, but I can't really deal with people who take themselves too seriously).

In fact, now that I'm thinking about it, the main thing that I was sort of underwhelmed by with The Middlesteins was that it didn't have a huge amount of story, but that's not the book's fault since it's not really trying to be anything but character driven, and family-drama-esque. I think the problem, actually, probably lies with me- I haven't been reading enough books where THINGS HAPPEN of late, I feel, and sometimes that can mean that all the Literary Fiction kind of bleeds into each other. I feel a reading resolution coming on...

So. There is nothing wrong with The Middlesteins! I liked it a lot while I was reading it, even if I have found it sort of forgettable, but regardless, it has left me with a general feeling of 'awww' about it, and not a general feeling of 'ewwww'. So, I have decided to allow you to read this, and you can do what you will with that recommendation.

P.S. While I was writing this, I stumbled across this review that is both so succinct, and so perfect that I almost gave up on this one and just posted a link to that. So here it is. Oh oh, and take Kayleigh's review too, since it's the one that made me want to read it. Nice one, Kayleigh!
Posted by Laura at 16:39