Devouring Books: In The Country of Last Things by Paul Auster 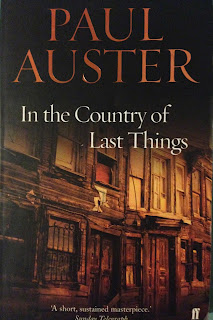 In The Country of Last Things has so many things about it that meant there wasn't even the smallest chance I wasn't going to love it. It is, first and foremost, a letter from a woman in a desperate situation to (it seems) the man she used to love. Books that are basically a long letter are a Thing That I Enjoy, cause I think it's a really good and subtle way to bring up past events, and also because it feels so intimate to be reading someone else's letters.

I also REALLY love dystopian fiction, which this novel also is. Anna is trapped in a nameless city that she entered to look for her brother and now isn't allowed to leave, and this place is like the end of the world whilst (it seems) the rest of the world is still going on as normal on the outside. Anna's struggle to survive is gripping and stressful and not a little heartbreaking, and that little letter writing trick works wonders again for not being mad at the amount of exposition that has to happen in order to explain what the city is like. Anna is a reporter of things to her person outside of the city, and a reporter to us, too. It's a pretty great way to tell a story.

You know who else is pretty great? Paul Auster. I've read a lot of his books because he's great, but I haven't enjoyed one in a long time as much as I enjoyed this, mostly because they're not as wonderful and dystopian as this. Auster, as opposed to say, Stephen King, takes a dystopia and instead of focusing on all of the gross things that happen (rotting flesh and burning flesh and other flesh related grossness) he takes us through it through the eyes of one character and lets us see the psychological impact of this broken world, and what it means to hold onto who you are in the midst of such chaos. I'm not sure if anyone could do this nearly as well as Auster, so I'm really glad he wrote this book.

The blurb on the back of my copy is surprisingly insightful for, you know, blurb, so it seems worth pausing over here (mainly because it relates to something I already wanted to say, mmmkay?) because, this: "this is not just an imaginary, futuristic world- it is one that echoes our own, and in doing so addresses some of our darker legacies." Because, yeah. There's one point where Anna kind of seems to get somewhere in the city, and then BOOM, just like that she's literally back to where she started, and it's just kind of like, isn't life like that sometimes? There also seems to be something Kafkaesque (I shouldn't really use that term until I've read some Kafka...) going on with shifting governments and their different levels of control over the citizens of the city, and I think that essentially this book serves as a reminder not to let governments get too powerful, and of what happens when they give up on an entire place.

I'll give you a hint: It's nothing good.

This book though, is really very good. It's great if you love Paul Auster, it's great if you like dystopian fiction, and it was definitely gripping enough to keep me entertained on a train journey to Canterbury. If that's not a ringing endorsement, then I just don't know what is anymore!
Posted by Laura at 08:00