Oh man. Not only am I late with my Things I Read in March post (I'm tryyyying to post them on the first of each month... I have now failed), I've also just opened it up hoping to see it already started and... it is not. I am such a deadbeat blogger these days that it's unreal, and I apologise profusely for my failings!

Mostly to myself. But anyway.

Things I read in March! There are quite a lot of them because comic books are magic. We won't talk about things I reviewed in March because that is basically nothing, but reading happened and that's all that matters? Maybe.

If On A Winter's Night a Traveller by Italo Calvino 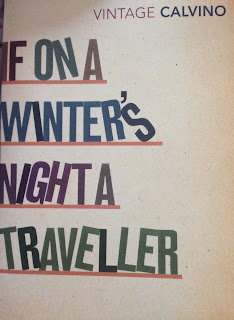 I was going to review this fully but it's definitely not going to happen, so here's how I feel: I'm glad I finally read If On A Winter's Night A Traveller because I feel like I've been 'meaning to' read it forever and just never manage to, but it hasn't become an instant favourite. To start with it was because I felt like the reader ('you'- the book is written in the second person... Kinda...) was assumed to be male and I was not down with that, but I forgave that when this was rectified later on. However, for me it was almost TOO inventive, in that, although it made me think about the nature of reading and all the different ways one can be a reader, it's so odd that it doesn't give you characters or even really a plot and I just don't have time for stuff like that.

In short: I think it would be awesome to study, but didn't really do anything for me as a general fun reading experience. 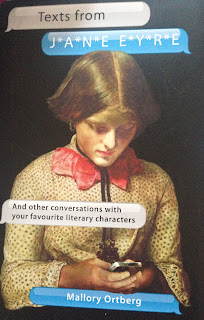 Texts from Jane Eyre is fully awesome. It sets my heart on fire and brings me joy. It's kind of gimmicky but it's also pretty spot on, and I especially recommend the Wuthering Heights section, which is so awesome I had to send it to Frances in its entirety (sample: "Cathy: do you want to make out right now? Heathcliff: god no. I want to wait until you're dead and then rip up the earth over your grave and crawl inside" BECAUSE THAT'S NORMAL!) There's also a lot of Shakespeare, but since so many of the classics are covered, you're probably going to find something to tickle your literary funny bone. 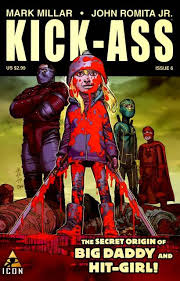 I think that's the cover off just one of the issues of Kick-Ass, but never mind... Kick-Ass! I watched the film a very long time ago (ok, like 6 years) and it was pretty great, and I finally got the chance to read the comic because Bex is great and lent me all the comics in the world. I'd love to tell you that I remember this really well but I kind of don't... I feel like it was deeper than the movie and more intense about the nature of violence, but I could be very wrong because of how long ago I saw the movie. This is therefore a total bust and I'm sorry I started to be honest, so let's just say... I read this! I definitely liked it. Boom 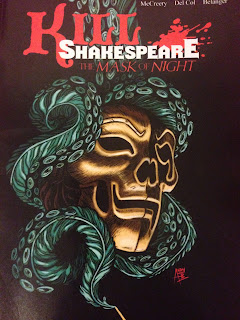 HAVE I EVEN TALKED ABOUT KILL SHAKESPEARE HERE BEFORE OMFG?! So. I totally wrote a bit of my dissertation on the first two volumes of Kill Shakespeare because I am a fool who thought it was a good idea to write about comics (it was, I had a lot of fun with it, but I probably could have got a better mark by writing about, like, feminism or something. But anyway.) What these comics do essentially is take characters from Shakespeare and pit them against each other, keeping their character traits in tact but shifting them round to fit the writers' desires. The Mask of Night is maybe my least favourite of the series (so far... I'm so hoping that there are more!) but that doesn't mean it was bad, just that it was shorter and there weren't that many characters involved, and also it finished with millions of pages left and I felt tricked because I'd taken it on a bus to read and then had nothing to read. SO RUDE. But anyway. As a Shakespearean Master and someone who likes comics a normal amount, I fully recommend this series in general, and this volume is totally fine too.

This is an adorable, teeny novella by Rainbow Rowell, the maestro of everything I want to read in life. I read it in less than an hour, and it's about a guy and a girl who meet in line for the new Star Wars film and it is, dare I say it again, just adorable. Clearly I don't have any more adjectives for it, but it's worth a read and more than worth the actual £1 it cost me. 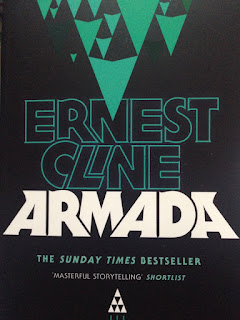 I have... Feels about Armada. I'm not sure if I'm going to review this properly or not (recent form says: probably not) but I think we all wanted Cline to write another Ready Player One, and this is not that. I was really unsatisfied with the ending, I was actively bored at the beginning, but at a certain point this changed from a book I didn't really care about to one I couldn't stop reading, even if the ending didn't satisfy me at all. I don't really know what you're going to take from that, but that's how it is, basically.

Eleanor and Park by Rainbow Rowell Eleanor and Park ended up being the only book I finished for the rereadathon, but I loved it so much more than I remembered loving it. I have already reviewed it here, and stand by everything I said in that review, but it just seemed to have so much muchness this time around. I think I might be a little bit sensitive to doomed love stories at the moment, but it just filled my heart with joy and then sadness, and it's just so perfect. I need there to be Rowell clones made up so they can produce about 20 books a year and then that's all I'll need to read. Can someone get on that please? 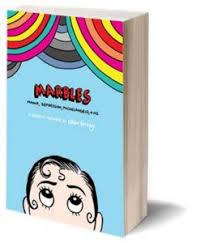 (can we all tell yet that I'm getting bored of finding images of book covers...)
I found Marbles in the library on literally the 30th March, and by the end of the day I'd finished it because of the magic that is comic books. Although this book hit so many of my sweet spots (comic book, memoir, mental illness) I found that I didn't really love it as much as I wanted to, or at least thought I was going to. The memoir deals with Forney's bipolar diagnosis and how she dealt with it (not very well) and although I like her drawing style and actually her storytelling, I think I had more of a problem with how things went down, in that I was frustrated with her inability to follow medical advice and then being surprised when things went wrong. The book also sort of promises a look at the connection between mental illness and creativity, but only follows through on it to a really limited degree before turning swiftly back to Forney and her specific issues. Basically, not my favourite comic book memoir ever (Fun Home or Persepolis, if you wanted to know).

I have been reading Everyday Sexism for approximately a billionty years, but I have had to stop reading it quite a lot of times because I just got too ridiculously angry to carry on. I finally finished it on the last day of the month, but I was definitely almost too ridiculously angry to finish it ever. I think this is a really important book, but I also think it won't necessarily reach the people who need it the most- women who don't know about feminism, women who think that feminism isn't needed anymore, men who catcall, abuse, attack and generally demean women every single day in a myriad of ways. The book is part stories from real women about the abuse they face on a daily basis, and part Bates's own words and work, shoring up individual tales of woe with stark and damning statistics to make it clear that this isn't just the story of one woman, but that of many many women, every single day.

I can't promise that it won't make you hate the entire world and the way it is skewed towards one gender (and race... and sexuality... etc etc) but it might also make you want to change the world, the way that I think Bates's Everyday Sexism project has, just a little bit. If nothing else, it provides you with so much ammunition against the people who say 'but what's wrong with catcalling anyway? I think it's flattering!' and so many other things besides. If you are an English person, the kindle version of this book is only £1.99 on amazon, and I really can't stress enough how important I think it is that people read this book, anger and frustration aside. Take as long as you need, and as many anger breaks as necessary, but please just read it.

BOOM, March done. I also started a few books in March that may or may not get finished in April, but either way I think I did a pretty good job this month, especially considering how much time getting obsessed with yoga took up! WOO GO READING.
Posted by Laura at 08:30