You know what I haven't done for a while? I thought to myself as I sat in my room one night. I haven't made a sexy pile of books that I want to read kind of soon-ish for such a long time. I should do that right now. LOOK WHAT HAPPENED: 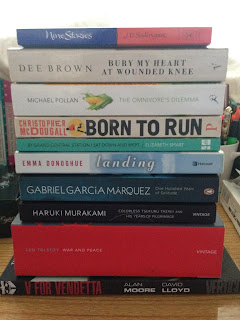 It's pretty. I kind of want to lick it.

So. I have literally no idea if The Broke and the Bookish still do Top Ten Tuesdays (or if, in fact, they even still exist as a blog. Do they?!*) but long after I got tired of making lists of characters I wanted to hang out with, I still enjoyed doing the top ten spring, summer, autumn and winter reads list because picking books to read is totally the most fun a person can have ever. So, this is my slightly late spring reading pile, with, if you'll care to notice, ten books in it. #tbt, if you like (I know, it's Wednesday, shut up) but here are the books and why I want to read them:


I am actually pretty excited by this pile, by which I mean it's been on my table for about a week now and I'm not bored of it yet. I also plan on finishing To Kill A Mockingbird and the last Dark Tower book over the next few months or whatever, but these books are the ones I am currently most excited about. YAY READING MY OWN DAMN BOOKS!


*Update: They fully do still exist. They even still do Top Ten Tuesdays! Where have I been?
Posted by Laura at 09:00