Sunday Sundries: I Kind Of Like Animals, You Dig?

So this has been a week of weekness, huh? Having 4 days off work in a row was, I don't mind saying, absolutely effing spectacular, but it weirdly made the week back at work feel SO MUCH LONGER than usual. And I say this as a person who had Wednesday off as well! It was a very strange one, and we were definitely all feeling it, and I've never been more relieved for a weekend than I was for this one. (That's a lie, I definitely have been, but I like to deal in hyperbole, to be honest).

And this weekend! I mean, I'm writing this on Saturday night so I guess things could go downhill, but today was so awesome. I had a bit of an impromptu visit to Birdworld with my friend Chloe (impromptu in that she was always going to go, but her friend cancelled on her so she asked if I wanted to go with her and her daughter, and I did!) and it was so much better than I anticipated! I basically agreed to go because my entire plan for the day was doing some washing and maybe going to specsavers to get them to loosen my glasses (that is today's exciting plan!) and I kind of wasn't expecting that much, but Birdworld turned out to be actually awesome!

Listen up, UK friends, as I tell you why you should definitely go to Birdworld. Firstly, there are SO MANY BIRDS. I know you definitely couldn't have gotten that from the name of the place, but I was expecting, you know, a few parrots, some owls, maybe the odd duck... but no! Flamingoes, penguins, toucans, kookaburras- name the bird, and they've probably got one of them. A lot of it is, of course, kind of just looking at birds in cages, but there are areas where you're just thrown in there, with the birds, and sometimes they're flying at you and it's a bit scary but mostly it's just fucking cool. 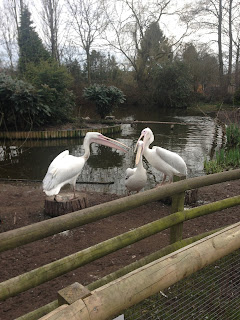 And this one time, this bird from Finding Nemo totally tried to eat this other bird's head, it was SO COOL.

But wait, there's more! Because there aren't just birds at Birdworld, there's a farm. They have the usual farm animals, plus guinea pigs and bunnies and just generally animals that are nice to pet and cute to look at, but you know what season we're in now? That would be spring. And do you know what happens in spring? THAT would be baby animals being born. I think you know where this is going, so can you guess who spent like half an hour playing with the baby goats?! That would be us. I can't even explain to you the joy of stroking baby goats, so allow this photo to speak for me: 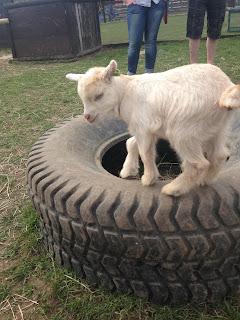 IT IS A BABY GOAT. ON A TYRE. LOOK AT IT. JUST LOOK. IMAGINE THAT YOU'RE ALLOWED TO TOUCH IT I MEAN I CAN'T EVEN!

So anyway. Birdworld is awesome! There's ALSO an aquarium if you're into that sort of thing, which I kind of am not, but at the same time, there's a dwarf crocodile there which is pretty darn cute... I mean deadly. I guess. Anyway. It's a cracking day out, and it's especially cracking when you're not really expecting to go, AND you're not expecting it to be great. Which obviously now you will be expecting so I've just ruined it, haven't I? Daaaamn... I also recommend getting a good friend to go with, cause Chloe is awesome and wins all kinds of awesome awards in my head so yeah.

So if this weekend was great (which I'm hoping it will continue to be because I'm writing this on Saturday night sooooo...) then this coming week should be even greater. THINGS are going on, to wit: It's my birthday on Saturday! I only have two days at work this week! I am going to THE GLOBE (!!!!!!!) on Wednesday to see The Tempest (!!!)! I have other days off to do stuff! STUFF AND THINGS, PEOPLE! I might even write some bloggity posts, who knows! Stranger things have happened, I guess. I guess... But anyway. I hope you all have wonderful weeks, whatever you're doing! (GO TO BIRDWORLD!)
Posted by Laura at 08:30