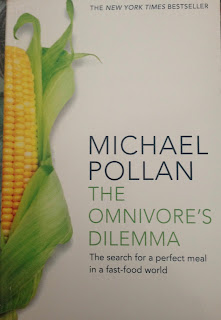 In reviewing The Omnivore's Dilemma, the devouring part of my blog name becomes important in two different ways- not only is this a book about food, and what we devour on a daily basis and how we should instead be devouring, it is also a book I absolutely devoured, being, as it is, both incredibly informative, and also really well written.

I don't really read that much non-fiction, even though I tend to enjoy it when I do, because a lot of the time it is fairly poorly written, so for this to be on a subject I'm really interested in AND eminently readable made it a real treat to read. Pollan is a journalist as well as a human interested in food, which I guess is why he's so good at writing, and The Omnivore's Dilemma goes from something that could have been really dry and dull and not that convincing to a masterpiece of non-fiction that has made me think a lot about the way I eat and the way I would prefer the world to be.

The book is split into three sections, each focusing on a different way of growing (or rearing) food and what it actually looks like. The first section looks at the industrial food chain, and how, in this world, growing crops and raising animals has become something incredibly removed from nature, so that yield rather than quality is the only thing that matters. I was genuinely shocked by the amount of corn that America grows and how much it is subsidised by the government, but also by how many ingredients are made from it and so how many processed foods contain corn. (Side note: I feel like in the UK we don't really use high fructose corn syrup and so it's possible we maybe have less of a corn-based diet. But I'm sure there's not that much of a difference).

"In the industrial food economy, virtually the only information that travels along the food chain linking producer and consumer is price. Just look at the typical newspaper ad for a supermarket. The sole quality on display here is actually a quantity: tomatoes $0.69 a pound; ground chuck $1.09 a pound; eggs $0.99 a dozen- special this week. Is there any other category of product sold on such a reductive basis?"

I feel like, in general, we think of cheaper products as being of poorer quality, but when it comes to food, the cheaper we can get it, the more of a deal we believe we're getting. It really made me think about the way I buy food, which to be fair is as cheap as possible because I'm really poor, but the same goes for food as goes for anything else- you really do get what you pay for.

The second part of the book focuses on organic food, and if you're reading this book and you try to eat mostly organic and feel pretty good about yourself, then you're not allowed to because organic doesn't really mean what you think it does, it seems. For an animal to be considered organic, for example, it just has to have been fed using organic corn (this even includes cows, who shouldn't really be eating corn anyway), and organic has gone from a grassroots movement to something that's just one remove from industrial farming anyway. The thing is, even though this is a fairly depressing thing to know, Pollan never dwells on the fact that it's kind of terrible, but merely looks at the way it has been before, and tentatively suggests ways in which things could, and maybe should, be different.

The final part of the book is where Pollan gets a bit personal, and where the inevitable question of vegetarianism comes into things. I think there were many points in reading this where I could feel slightly smug that I wasn't a part of the problems described by factory farming of animals, and so Pollan's own consideration of the topic was interesting to read. Essentially, I think he does a better job of justifying his decisions than does Barbara Kingsolver (ugh) and actually it made me think about the reasons I don't eat meat and made me probably admit to myself that if I could get some meat that I had some kind of guarantee had had a pretty nice life, then actually, yeah, I'd probably eat it. So actually that was an interesting lesson for me to learn about myself, or maybe actually I just really want a steak.

A steak because, although I would say bacon, this book has probably put me off ever eating pig again ever. Because, apparently, pigs get so incredibly depressed and distressed being in confinement on factory farms that if the pig directly behind them bites off their tail (because of the distress) then they're too depressed to even care about it. HOW IS THAT OK WTF ARE WE ALLOWING TO HAPPEN HERE?! Other fun facts: mushrooms are really weird and we don't really know anything about them, basically everything on the McDonald's menu contains corn, and the guy who developed fertiliser also developed Zyklon B, AND HE WAS JEWISH, although (probably thankfully he died before the Holocaust), and these are just the ones I can remember. Seriously, this book is really good.

And so. I fully recommend that everyone read this book (I am literally trying to lend it to everyone all the time at the moment), and become more aware and caring about the things you buy to eat, not just when it comes to meat, but also in general, for your health, and for the planet. Peace out, hippie whatnot and whosits.
Posted by Laura at 11:52