Sunday Sundries: Summer is here, so obviously I am getting harassed

I have had a week of life and it has been ok! Let's see... I had both Monday and Wednesday off this week because of blessed bank holidays and being generally underemployed respectively, and it was pretty great. Last Sunday I went to the seaside and had the world's best ice cream: 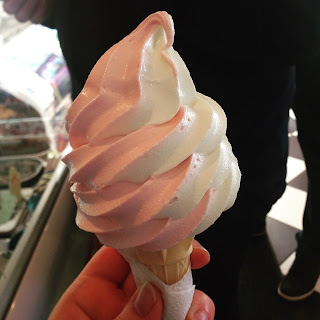 so Monday I just spent pretending it was Sunday and went to see my parents and whatnot. Wednesday I had a whole load of life admin to do, but that was mostly non-time consuming and so I spent the majority of the day outside reading The Omnivore's Dilemma and feeling mightily pleased with myself (harassment story to come). And THEN yesterday I went to big London because there was an exhibition I wanted to see and it's finishing next week and, even though it was approximately 5000ºC yesterday, I couldn't deal with the possibility of not seeing it, and so off I went to sweat on trains and the tube and in Hyde Park and basically everywhere I went.

On the exhibition: it's at the Natural History Museum and it's called Otherworlds, and essentially it's really amazing photos of the planets, moons and asteroids in our solar system as well as, y'know, the sun. I think I probably don't talk enough about how much I love space here, but I really fucking love space, and this exhibition was kind of partially science and partially art which is pretty much how I like my life (and exhibitions). Mercifully it was also dark and cool, unlike the rest of the Natural History Museum which was like an oven. I spent the rest of the day eating lunch in Hyde Park, and then strolling down to Oxford Street to buy some things (many things...) (I bought a swimming costume, when am I even going to swim, what has become of my life?)

Anyway. The sun is out so I am generally a happy Laura, and also I have been wearing summery dresses that show a lot of boobage. And my god. The men have been feral, it's kind of gross. If we discount the number of times I saw my chest get eye contact yesterday (that's right fellas, I noticed), I've had two separate guys in cars being pervs. The worst was on Wednesday, when I was innocently walking down my road when this guy in a van (of course) drove past, actually LICKED HIS LIPS, and shouted 'nice tits!' I didn't disagree with him, but didn't exactly need the validation in such a gross way. Yesterday, though, I was walking home from the station laden with bags when I heard a beep and saw this old guy driving past me and grinning. I was so perplexed by this that I assumed he was trying to tell me I'd dropped something or whatever, but I looked around me, saw nothing, so assumed my breasts had been spotted again.

I don't really know where I'm going with this. Having read Everyday Sexism, I know that many women feel threatened and upset by this kind of thing, whereas I mostly just feel pissed off and, y'know, confused. It's still a really weird phenomenon- the intention isn't for these dudes to actually ever have a meaningful interaction with you, and they can't possibly think it's alluring in any way to just yell things at girls, so why do these guys do it? Is it the horribly misguided belief that their opinion on women's bodies matters even the slightest bit? Or is it, as my friend pondered, that they just haven't been weaned yet?

Either way, it doesn't affect my life in the sense that I'm going to stop wearing whatever the fuck I want at all times of the year, but if anyone wants to give me an insight into the minds of these dudes, I'd definitely be willing to hear that.

But anyway- I hope you all have a fabulous week, with much sunshine and many opportunities to let your girls get a bit of air. I am barely going to be home for dinner at all this week, which is very exciting, and I shall let you know all about that next week.
Posted by Laura at 08:30