Second-Saturday Sundries: Living Life and Getting Through

Is there anything better than a Bank Holiday? I think probably not, except for, like, actual holidays and days when there is cake. In a practical sense, what this Bank Holiday means is that I can apply for jobs without feeling like I'm losing a day of my liiiiiiife because I have a whole extra day off tomorrow where I can actually do things I want to do! (What I want to do: go to Reading with Frances and eat all the food. It's happening.)

I've probably written too much in general about how much I hate applying for jobs, so I'll avoid that line of thought today and go on a different, but still as sad route. Friday was what would have been my Grandad's 88th birthday, and tomorrow marks one year since he died, and one year of living without any grandparents. It's weird to put it that way, I guess, but when your grandparents have had an important presence in your life for 26 and a little bit years, and then they all go away in 17 months, you have to figure out how to get along without them.

Here's where I'd normally try to share things I'd learnt, or some kind of hopeful message or something, but if there's one thing I don't really know anything about it's being positive about death (also, boys. But that's another issue.) But seriously, it really sucks, and everything hurts, and then everything hurts slightly less, but it continues to suck, and I don't think it'll ever really stop sucking. Death is weirdly life-changing, and in the past year it's been so strange to not see my family every Sunday, and to not be able to go to my Grandparents' house anymore (I don't think I've really accepted that one), and just generally, to have fewer people in my life who are unconditionally there for me and think everything I do is amazing, whether it is or not.

It's just been really hard, is what I'm saying.

And yet. We carry on because there's nothing else we can do, and slowly carve out new things that we do all the time. I do still see family on Sundays but it's just my mum and dad, but that's enough. I don't get to see my grandparents on their birthdays (or, indeed, mine) but they're still always with me, and that's enough. It wasn't fair to lose three of them so close together, but it wouldn't have been any easier if they'd been spread out because I loved them and didn't want to lose them, ever. I don't really know where I'm going with this because I don't have a unifying statement, a grand message of hope, I just have this: I love them, I miss them, I was lucky to have them. Nothing will ever be as it was, but that doesn't mean it can't be just as good, just in a different way. Or at least I hope (ha! Hope) so.

So, Friday. With a touch of providence, I also got my Lucky Dip Club subscription box for the month on Friday, and in it were some seeds. I can't remember ever planting anything before, but I can remember getting my grandad to plant things for me, so it was wonderful to, even in the smallest way, be following in his gardening footsteps and planting my own little seeds, waiting to see what would flower. 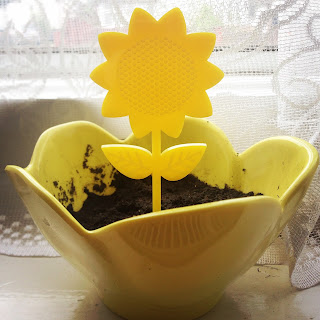 I guess I'm waiting to see what else my grandparents have planted in me that's going to flower later. Knowing them, I bet it's going to be just wonderful.
Posted by Laura at 20:16