Happy Sunday, everyone! Here in merry old England it is warm but kinda cloudy and I am not into that at all, so I'm essentially staying in my room, 'tidying' (blogging) and 'looking for jobs' (reading) because what else are Sundays for? Exactly.

So, I missed last week's Sunday Sundries. MY BAD. It's especially my bad because the most exciting thing (to me) happened and it deserves a moment of pause: 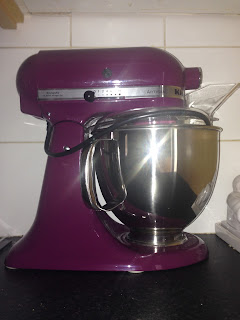 I GOT A KITCHENAID. Look at how beautiful it is, I simply cannot cope. I suspect that normal people probably don't really care that much about Kitchenaids, but I've wanted one for a veeeery long time now, and, as I said to my housemate, it's definitely the best consolation prize for all my grandparents being dead that there ever was. (I don't want that to sound flippant and OBViously nothing makes up for it, but this was a present from my mum out of her inheritance etc etc. And I love it.)

I feel like it might be a better present for everyone who knows me than for me because I am so eager to use it at all times that I keep baking things. I made cupcakes the day after I got it, and then less than a week later (i.e. Wednesday) I made a chocolate loaf cake (so good) and I'm considering making some cookies today, so, yeah. I'm baking the hell out of stuff, does anyone want some baked goods because seriously, I want to make them!

In further excitement, I went to see King Lear and it was actually quite a good production (King Lear is notoriously difficult to perform and stage). Even better, I bought the cheapest ticket because I'm not a millionaire, but I presume they didn't sell enough (poor Shakespeare) so I got upgraded to a way better seat for no money, which totally felt like winning.

Last weekend I went out with work and got preeeeeetty drunk which was great, and Saturday I went to this Harry Potter comedy parody... thing with my sister. It was funny, BUT I felt like the performers found it funnier than I did, and I couldn't help thinking that with all of my Harry Potter experience and experience of being fucking hilarious I could kind of have done a better job? And yet. I still enjoyed myself so I shouldn't really complain.

And now we realise that it's a good job that I didn't Sunday Sundries at you last week, because I don't really have anything to tell about this week, apart from, you know, work and so on. Friday was my dad's birthday so I went to see him and eat food, then slept at my parents' so I could meet my auntie's boyfriend's dog (I have my priorities right) and also to be fed and generally looked after for a day because who doesn't want that?! Nobody, that's who.

Which just about brings us up to now. In book news, I'm really trying to read less books at once which is why I started two new books this week when I was already reading two (*sigh*) but being in the middle of four books is still less than I was in the middle of at the start of May, so... baby steps? In life news, the soundtrack to my entire life for the whole of May so far has been the soundtrack to Hamilton, and OH MY GOD. I feel like a fool for not listening to all of the Americans I know (sorry, guys) in like January about how good it is, but I have now learnt my lesson and it's all I can listen to. If I had a bucket list, basically all that would be on it at the moment is seeing Hamilton (and it better come to London soon, or so help me God...) and ARGH HOW IS IT SO GOOD?!?!?!?!?!

I know. I'm a thousand years behind everything. But at least I know now!

So that is me. What have you been up to, tell me everything.
Posted by Laura at 13:58