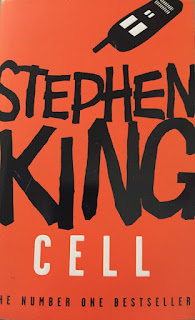 Cell. What is there to say about Cell? I have mixed feelings about this King, because although I have quite a few problems with the story and its pacing and ughhhh the ending and the dull parts, it's also the first King book in a very, very long time to actually scare me. Doubtless this has something to do with the fact I've just come off of a run of re-reading, which is never as scary, but there were some truly chilling parts of Cell that made me want to leave the book somewhere far away and never return to it. Which is GREAT, and something that I never realise I miss from a King book until it's there again and it's like ahhhh. That's the stuff.

But, then again, there are the flaws.

Ok, so Cell has, I believe, been lauded as a kind of 21st century version of The Stand, which is frankly a crazy thing to say because it's nowhere near as good as The Stand, although equally as apocalypsey (yep, I just made that a word...). The book starts with this pulse that affects everyone who has a mobile phone switched on near them, making them literally lose their minds, going feral and injuring others and sometimes themselves. Anyone not in possession of a phone is in extreme danger, and in this first wave of suffering and horribleness, not only does a large portion of the population become dangerous, another large portion become victims of this new danger, killed by anyone standing near them with a phone.

This novel is very much of its time in the sense of being scared of mobile phones, in that it was written in probably at about the last point in history (2002, I think?) where we weren't all glued to our phones. It's vaguely technophobic in its sentiment, and definitely made me wonder what Stephen King (now with his own twitter account!) thinks about the fact that the majority of people now carry a tiny computer around in their pockets and how the internet has progressed in the relatively short time since he wrote Cell. Maybe Stephen King just sits around thinking everyone's basically a zombie these days, who am I to say?

Anyway. One of my main problems with Cell is the fact that it is so immediate-aftermath-y after the initial pulse, rather than taking a wider look at what would happen to society (such as it is) in the months and years to come. The entire book takes place in basically the first month after the event, and frankly I like my dystopias to have a little wider-ranging view than that (see: The Stand). The timeline is also ineffective because whilst it means that some things get resolved quickly, it also means that one of the major events in the books feels incredibly rushed, almost like King thought 'God I'm bored of this now, let's just get this over with'. It's very possible that more thought went into it than that (God, I hope so), but it still feels like a bodged job to get the book ended, essentially.

And yet. There were still interesting parts. One of the most intriguing ideas I found from the book was the thought of what humanity means when the majority of it has moved on whereas a tiny minority stay the same. The characters speculate on what it means to be in the 1% of humanity unaffected by the pulse (and still alive) vs the 99% who, it becomes clear, are almost evolving into something completely different. The uncomfortable question arises of, if they're now the minority and humanity now looks completely different, if they try to hurt or kill the 99%, does that make THEM the bad guys? It's all very interesting stuff, and I would have liked to have seen that explored more than all the descriptions of walking, and, you know, how shocked people are and stuff (it's a lot. Obviously it's a lot. Duh.)

So, my mixed feelings remain, even if they lean more to the side of encouraging people to read this, if only for the scares elicited by the phone zombies. I read this on the coach back from Leeds, and genuinely had to keep stopping reading it because I couldn't quite cope, and you know what? That's honestly what I started reading King for in the first place. This isn't his best, but it's still pretty good for the scares and even for the thinks.