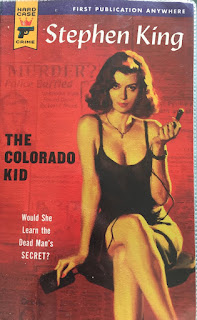 The Colorado Kid is, I think, one of the strangest King books I've read. It's not especially strange in subject matter (it's one of those that merely hints at the supernatural rather than enforcing it), but it's strange in the sense that, structurally, it's much more about the telling of a story than about the main event itself. Even now, it's a structure that I'm not entirely convinced I liked, but at the same time I still feel like I enjoyed this book a decent amount.

I'll back up a little. The Colorado Kid opens with a lunch between two old, ollllld journalists from a tiny Maine newspaper, their 22 year old intern* whose name I definitely can't remember, and a hotshot journalist from, I wanna say, The Boston Globe**. This hotshot is down at the Maine coast to try and extract from the older men an 'unsolved mystery' kind of story to publish in his larger paper, and the men tell him that sorry, they really don't have anything for him. He goes back to Maine, the intern confronts them, and it turns out that, in fact, they have a GREAT unsolved mystery story (because of course they do) that they just didn't want the other guy to have.

This is pretty much the jumping off point of the story. From here, I expected it to be mostly mystery based, told in flashbacks and kind of ignoring the characters introduced in the first chapter in favour of the mystery. What I got instead was a glimpse into the workings of the newsroom of a tiny paper, a lesson in patience, journalism, and attempted mystery solving for the intern, with way less mystery than I was expecting. Whilst this very occasionally became frustrating because I wanted to knowwww what happened to the guyyyy (yeah that's how I phrased it in my head), I also became more interested in the journalist characters, their methods, and what happened to them, too.

The Colorado Kid is a teeny weeny book, perfect for carrying around and reading on the train and whatnot, but maybe not perfect at being either a mystery OR Hard Case Crime (which is the publishing house it belongs to, but also let's pretend that's a genre cause it sounds good) novel. It's a total deviation from what I was expecting, and there was hardly a policeman's voice to be found, but it was great at building characters who were as interested in the mystery as the reader, and is just, in general, pretty fun to read. Mainly (she says in jest... Kinda...) I was happy to read a really little Stephen King book for once, and I'd ask the guy to keep it up but I've seen some of the ones to come and maaaaaaan. It really makes you appreciate the littleuns.


*I say intern, I maybe mean 'fresh out of journalism school and in her first job' but intern is neater either way.
**It's been a while since I read this ok, give me a break.