IT IS NOVEMBER how did this happen? I know, I know, time passes and life happens and yadayadayada. My October was bookended by the loveliness of seeing Les Mis with my best friend of 10 years (yes we had a friendiversary, what of it?) and going on the Harry Potter Studio Tour with my most excellent friend and most ardent Harry Potter admirer yesterday. The in-between parts have been mixed at best- I've felt a lot of work stress since I've lost half of my team but have the same amount of work, and my living situation has been confusing and mildly upsetting since I've been waiting for my boyfriend to properly move in which finally, finally happened this weekend.

So November is looking up! I finally have my honey here and I'm learning to treat work as the (underpaid) job it is and not as the end of the world. I have no winter reading plans yet which feels weeeeird, but I'm assuming at the moment that it'll involve the library books that I've paid money to reserve but obviously have not read yet (I'm a monster). My October reading, however, did involve a great deal of library books, so that's a contribution, right?! Right. See? 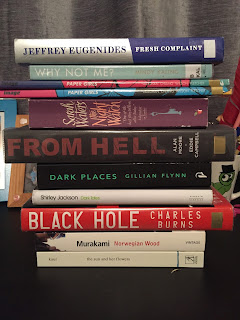 The Sun and Her Flowers by Rupi Kaur
So for reals, I never pre-order books because I feel too guilty about all of the books I still haven't read that live in my flat. I made a very clear exception for Rupi Kaur because Milk and Honey, her previous collection, was literally my everything when I read it in February. This was no different- I felt the feels and still have all the admiration for Kaur's writing. I can't get enough, and completely did not stop reading this until there wasn't a poem left. Read ittttttttt.

Norwegian Wood by Haruki Murakami
I can't really remember what motivated me to re-read Norwegian Wood, other than the desire to see exactly what it was about it that I loved so much. It's probably still a little indefinable, but I know that I still love and admire it, and how it captures both hopeless and hopeful love.

Black Hole by Charles Burns
I... Didn't like this so much. I got it out of the library because comics! Yay! but it turned out not to be as interesting as I wanted it to be. It's essentially the story of a (sexually transmitted) virus affecting teens that turns them into mutants, but less interesting than that sounds. I felt as though too much time was dedicated to telling the teens (kinda dull) individual stories, rather than talking about the virus as a larger and more widespread issue. Maybe I'm too old, or maybe it just wasn't that good, but for me there was definitely something missing from this.

Dark Tales by Shirley Jackson
Hey, I already reviewed this! But if full reviews are a bit too TL;DR for you then just rest assured that I LOVED this collection of short stories- I couldn't get enough of them, even more than the normal way I can't get enough of Jackson. THESE ARE SO GOOD AND HORRIBLE, ya know?

Dark Places by Gillian Flynn
I enjoyed this book a lot, and would have reviewed it for RIP had I not run out of time (and totally read too many books for it already). It's about a woman who, for the past 24 years, has been living with the hellscape of the knowledge that her brother murdered her mother and two sisters. when this is thrown into doubt though, she really starts living, and examining what happened that night and whether or not her brother is actually innocent. I enjoyed this in a lot of ways- I love the tension that Flynn brings to her novels and with this being told in the past and present, it presented a lot of opportunities to guess what had happened which is always exciting. I also loved that our narrator and survivor of mass murder isn't entirely relatable or loveable- she's sharp and mean and very selfish, and it's refreshing that she's not presented as someone deserving of all our sympathy just because she's been through something terrible. It's very good stuff, and I think it might actually be my favourite of Flynn's (so far).

From Hell by Alan Moore
Oh hey, I've reviewed this too! This is genuinely amazing, and I had expected nothing less from Moore because I always find his work exceptional. It's SO MUCH BETTER than the film, and considering Johnny Depp's face isn't in it, that's saying something.

The Night Watch by Sarah Waters
I picked this up because I mistakenly believed it was a scary book, but this turned out to be one of the non-scary Water's books. It also turned out to be really good- it's told backwards which is really interesting, and it covers women's stories during WWII which is an area that I have pretty much read nothing about but am of course incredibly interested in. There's really everything in this book- lesbian relationships (of course), women risking their lives as paramedics during bombings, dangerous abortions, a gay man in prison... What isn't there?! Overall, though, the characters are so engaging and interesting and everything about this book was really just excellent.

Paper Girls Vol 1 by Brian Vaughan
I really didn't know very much about Paper Girls before getting it from the library, but that is the luxury of just grabbing free books. This turned out to be great though- it's literally about a group of paper girls who get dragged into a conflict they don't understand and that I didn't really understand except that I know I liked it? VERY engaging stuff, and I read it during the readathon which was perfect.

Paper Girls Vol 2 by Brian Vaughan
Not so surprisingly, I read the second volume straight away. Surprise! It was just as good as volume 1, if not better. There is time travel involved in these comics, and this is something I enjoy A LOT about a comic, so I am all over these really. Can someone get me volume 3, please?

Why Not Me? by Mindy Kaling
I have mixed feelings about Mindy Kaling in that I usually think she's funny enough but sometimes I'm not too into it? This is why I haven't seen that much of the Mindy Project, and it's why I liked but didn't LOVE her other books. Nonetheless, I got this from the really out of the way library near my work (a nightmare because it's open for 3 days a week and I can never remember when they are/be bothered to take it back). THE POINT anyway is that I enjoyed this for the most part, and I can sidestep the parts I didn't because yeah, Mindy is pretty funny, I'm into it.

Fresh Complaint by Jeffrey Eugenides
Jeffrey! I love Jeffrey! I feel like I knew a really long time ago that Eugenides' next book was going to be short stories, but I managed to forget it and thought I was getting a novel. I'm not sure if I was excited or disappointed when I realised I was actually getting short stories (because, for reals, I loooove short stories) but I can tell you that I wasn't disappointed by the stories themselves. I mean, what can I say? Eugenides can write and I don't even know how to be critical of him really because I love him too much. I found all of the stories in this book so well written and covering all sorts of different areas of life and the world (although a lot were from a white male perspective but whatcanyoudo?) Basically, you should obviously read this because Eugenides the end.

Um, so yeah. I read quite a lot this month, huh? Readathons and, still, lots of bus time will do that for you! Here's to some more excellent November reading.