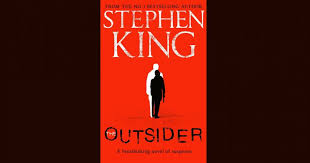 There are so many things about summer - the long nights, the warm days, the general feeling of wellbeing I get from it - that just make me want to read outside all day long. Unfortunately I work full time and don't have a garden to sit in seclusion and read, but there are always weekends, and there are always parks, ya know?

But what will I be reading this fine summer, I hear you cry? Let's take a look: 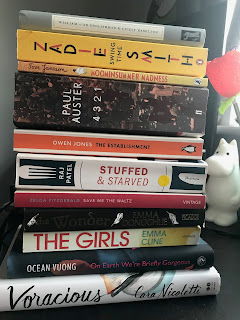 Ahaha, what a good picture - can you tell I'm rusty at this blogging thing?! I'm not re-piling them, so this is the photo you're getting, alright?! They are, from top to the bottom:


So really, my summer is shaping up to be amazing - books about food and a giant Paul Auster, books by Emmas and one by an Ocean, plus Moomins and attacks on British Government. What could possibly go wrong?!

What will you/have you been reading this summer?
Posted by Laura at 09:52 1 comment:

I'm not going to bore you too much with where the f I've been, but if I may just summarise - my computer broke around the time I would have written my 'Things I Read in April' post, which was a traumatic event in itself. It then resurrected at around the same time my friend informed me that I could download The Sims 4 for free, which has lead to about a month long fall down The Sims rabbithole (I have logged many many Sims hours) which has made both reading AND blogging (which, let's face it, I wasn't doing anything like frequently anyway) fall by the wayside a little.

However! I now have a new laptop (my old one died again for real this time a couple of weeks ago, and I'm no expert but is my laptop Jesus?!) which fires up so quickly I could weep, plus The Sims 4 has started to be annoying and glitchy, so dare I say... I'm back, baby! I probably don't, because the OTHER reason for being away for quite so long is that work has been genuinely insane for the past two months, and I don't see THAT changing any time soon, and also I'm me and have no staying power and stuff.

BUT ANYWAY. We still have today, and let me take you on a brief (I promise!) walk through what I've been reading amongst the chaos of my life. 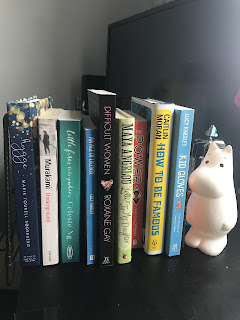 I did read quite a bit in April, but for full disclosure, I read the first 6 books either before or on my birthday (to complete my 100 books from birthday to birthday challenge WHICH I SUCCEEDED AT BTDUBS) so basically as you will see through this post, I have read so little since I turned 30. SIGH *shakes fist at The Sims*.

Highlights of the month:
Difficult Women by Roxane Gay - Honestly this was just a divine collection of short stories from Roxane Gay who has taught me to expect nothing less than perfection from her. I think I pretty much read this book in a day, and it was harrowing and humbling and excellent.

Letter to my Daughter by Maya Angelou - I read this on the eve and morning of my 30th Birthday and I didn't realise it would be when I picked it up but it was the perfect send off to my 20s. Angelou does not have an actual daughter, but millions of women look up to her and this book is for us - it's stories, advice, and it's amazing.

Underground by Haruki Murakami - I didn't know what to expect from Murakami non-fiction, but the answer was a really interesting insight into the Japanese psyche of both the victims and perpetrators (ish) of a gas attack in Tokyo in the 90s. I felt not only better informed about World/Japanese events (did I know there was a gas attack in the 90s? I did not) but just truly intrigued about all of the different aspects of and attitudes to the same event. Would LOVE to read a Murakami book about other acts of terrorism because I'm sure we could all afford to look at things a different way.

Disappointment of the month:
The Power by Naomi Alderman - Alright, look. Almost all book disappointments arise from my own preconceptions of them, but am I alone in wanting The Power to be ABOUT the revolution as opposed to the events that lead up to it? I was disappointed by this because I wanted it to be a different story, essentially, and I truly feel like it could have been much better because the world building here is IMMENSE, but is (I feel) not used as well as it could be. Potentially an unpopular opinion, but it is still mine. 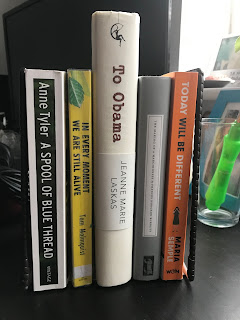 Ok, so I didn't read that much in May but I can honestly say that I loved every one of the above books. No disappointments at all! (I wish I could say the same for June...) I cried at AT LEAST three of the above, and yet, you know, I can still pick favourites, it's fine.

Highlights of the Month:
In Every Moment We Are Still Alive by Tom Malmquist - Your heavily pregnant wife is rushed to hospital, seriously ill, and within a few weeks you are a new father and a widower. If that sounds like a tearjerker then you must have a human heart, and yes, of course this book had me crying in public, what do you take me for? This is Malmquist's memoir of a really really really hard time, and whilst it is of course moving, I also want to applaud it for not being overly sentimental. He doesn't try to pretend that either he or his partner were perfect, but just that they were together, a unit, and now they are not. If you need a cry, read this, and if you need motivation to just get on with things, also read this.

To Obama by Jeanne Marie Laskas - THIS is a beautiful gem of a book and I want everyone to read it now now now. As President, Barack Obama used to read 10 letters every night to get something of a snapshot of the real America, and this book details the process of how these letters got to him out of the thousands received every day. It reprints many letters received (some of which, predictably, made me cry), as well as following up with the people and families that sent them. It really delves into the importance of a president who actually does listen to the people, as much as they can, and was a stark highlight of everything that has been lost since Obama left office.

The Making of a Marchioness by Frances Hodgson Burnett - The first half of this novel is wonderful. An unassuming, highborn but low fortune lady, who does odd jobs for richer women and genuinely takes pleasure in the tiniest things gets rewarded for her goodness by attracting and marrying a Marquess (I'd say spoiler, but the book is called The Making of a Marchioness!) and everything is fab. The second half is, unfortunately time appropriately racist as an Indian servant is suspected of witchcraft (voodoo?) to try and bring misfortune upon the Marchioness. I don't want to defend it by its age, and I was really uncomfortable reading these parts of it, but (but but) the Marchioness is such a wonderful, aspirational really, character that I had to put this aside a tad. A highlight AND A disappointment, then? I think so.

Also Reads (but also loved):
A Spool of Blue Thread by Anne Tyler
Today Will Be Different by Maria Semple 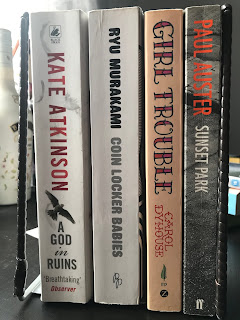 I have not enjoyed - or at least not wholly enjoyed - many of the books I've read this month, which is a bit of a shame but hey, it happens right? Let's try and find something good about the month...

Highlight of the Month:
Sunset Park by Paul Auster - Ok this was pretty ace, and coming at the end of the month it gives me optimism for future reading (that's a reasonable thing that people have, right?) I don't even know what to tell you about it really, except that it's Paul Auster, and I feel as though he just knows people better than almost any other writer, and writes better than most of them too. The story is held together with pop cultural threads (I believe all the characters watch a movie called The Best Years of Our Lives, which Auster has clearly thought a lot about) and they are just so human and flawed and exploring and trying to be better and just read all of Paul Auster's work and tell me you don't like him, alright?

Disappointment of the Month:
Coin Locker Babies by Ryu Murakami - This book goes under the category of books I should have stopped reading, but didn't. I realised I wanted to stop reading about halfway through, but since I'd already made about a 250 page effort, I didn't want to give up, plus I wanted to get to the point. Turns out, it didn't have one (surprise!) and honestly it felt a lot like the other Ryu Murakami books I've read, except they were way shorter so the disappointment was less. This was weird in an annoying way (as opposed to Haruki Murakami) and jumped all over the place and just in a general sense wasn't very pleasant or fun to read.

THANK YOU, for your efforts if you slogged all the way through that post! I'll try to make the next one just a leeeeetle bit shorter!
Posted by Laura at 08:00 No comments: