I went to University in Southampton (the English one), which is in Hampshire, the same county where Jane Austen lived for a pretty hefty period of her life, in a house that's been preserved to a similar state as whens he lived in it. Chawton is a really beautiful little village, straw roofs and all (basically the kind of village that people expect all of England to look like) and, in spite of doing an English degree, and being an avid Jane Austen fan, I didn't actually go there until I'd, ahem, finished my degree.

Well, that's not technically true. I had been to the big manor house (Chawton House, where Jane's brother Edward, who essentially moved Jane, her sister Cassandra and their mother into the house he owned, lived) which is now a library to research this research project thing (and oh man, it was such a kick just going in there where Jane undoubtedly went to dinners and things) but this trip essentially went: coach-car park-Chawton House-car park-coach. And, dammit, I wanted to go into Jane's house! So, once we'd done with the daily grind of learning shit, Frances and I planned our glorious trip to Chawton.

Well. I say glorious. Here's the thing. Neither of us drive, and to get to Chawton is an entirely tricky business which required getting a train to Winchester (we also went to Winchester Cathedral to see where Jane's buried, which was nice... morbid ish. But look at how nice the Cathedral is! Pretty, huh? And then that day, after that, we went to a gay club. Nobody ever said we don't know how to mix things up!)
Anyway, so we got the train to Winchester, then had to locate the bus station and get the world's least frequent bus, that in fact dropped us off on the side of a motorway (maybe not a motorway, but a really fast road!) and then we had to walk to actually find Chawton. Accompanying us on the final lap of this journey were two nice American girls, and I kind of felt upstaged by them- I mean, they'd travelled thousands of miles to get to Chawton, and I hadn't even bothered to travel the 25 miles or so before then? Those bitches making me feel bad!

Fun fact about Chawton- there isn't really anywhere to eat. There's a tearoom (Cassandra's Cup!) and a pub and... that's pretty much it. I heartily recommend bringing a picnic, although the pub is alright to eat in. But anyway, that's not what we were there for. We were there for this: 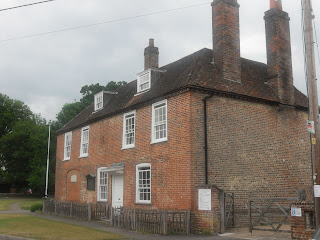 Jane's house! The place where she wrote things, and where, so Wikipedia tells me, she had 4 of her novels published, and by one of the downstairs windows, there's a little writing desk where you can totally imagine her writing. It's really a pretty exciting place to be, and even though it's just an old house, it's so much more than an old house as well. And, while I can but assume that her garden is wildly different to the way it was when she lived there, it's still pretty lovely: 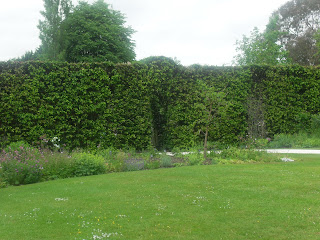 It's prettty, and we sat in it for a bit. We also, (and if you're extremely lucky when you go there you might get to do this too!) got to sit in a room with many many old people, and watch a nice educational film about the life of Jane Austen. And while I mock it mildly, I did learn a few things, and it was nice! We also, after the house, walked up the road to Chawton House so I could take a picture of it because I FOOLISHLY didn't when we'd been there before, and it mainly looks like it's made of trees: 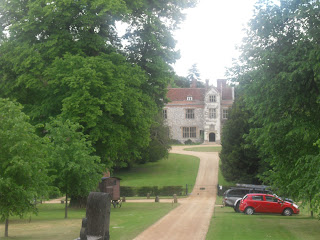 But rest assured, it's really big and pretty, and OMG it's basically a library for rare books now, AND I think you can get married there! You just can't really go right up to it unless you're there for an event or something. Sorry. After our walk up to the house, we went to Cassandra's Cup, where Frances had a lovely traditional English Cream Tea, and I did not because ew, scones, ew cream, and ew tea; but I'm assured that she enjoyed it! Then, we schlepped ourselves back to the side of the road where we waited, ooh, about 45 minutes for what was possibly the last bus (at around 5pm) and made the backward journey away from fairytale England and towards the heaving metropolis that is Southampton.

And it. Was. Great. Wildly recommended for all the literary history, just as long as you remember to take a picnic.
Posted by Laura at 11:24