I don't have a Bucket List because 1) morbid, and 2) I'm really lazy. If I did have one though, pretty high up on it would have been making a Rainbow Cake, because there's literally nothing in the world that I've wanted to bake more, ever since Whisk Kid made one well, ages ago now. So, with my cousin's birthday on the horizon, and me being the premier baker in the family, I couldn't think of a better opportunity to try out a Rainbow Cake. 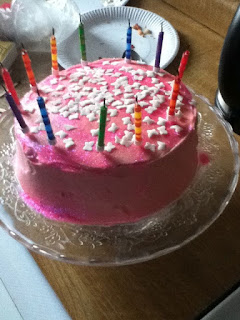 So this is what it looked like on the outside, and yes, it is the girliest cake ever, and yes, that is much hot pink edible glitter you're seeing, and yes, my cousin likes butterflies. I'd like to tell you that the rainbow candles were a clue to its rather more exciting innards, but that would be a lie- they were basically the only candles in my nan's house. After the grand ceremonial blowing out of the candles, I tried to get my cousin to cut the cake numerous times, stopping just short of yelling at her to 'CUT THE FUCKING CAKE', but I did eventually just have to cut it myself, to gasps of admiration and joy from all (most of all me, I suspect). Because, just LOOK! 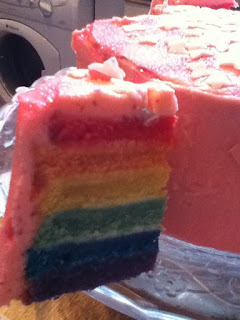 Rainbow Cake! Glorious, glorious, rainbow cake! It's literally the greatest thing I've ever done, and I'm including getting a degree in the lists of things I've ever done. If I ever have children, they probably won't be as good as this cake. Do you want to see more of it? Of course you do! Here are some construction-y pictures: 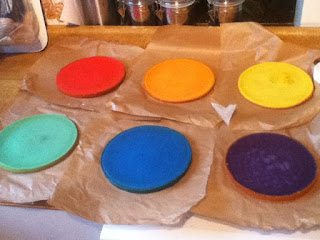 To me, they look like giant versions of those round blocks of paint we used to have at school... 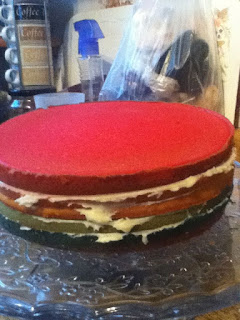 Just before it got pinkified...
And, actually, it took less work than you'd probably think- I just made a basic vanilla cake recipe, separated the batter into 6 bowls, and added gel food colouring (the liquid stuff just really isn't good enough). And then baked it and iced it, and, well... Made everyone have rainbow coloured stomachs, probably! Wanna see another slice?! OK! 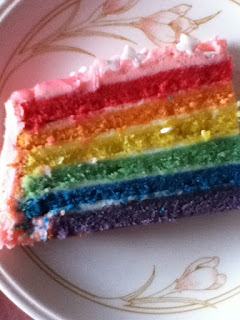 Just, mmmm. Yes. Perfect. Well, not exactly perfect because if I did it again (which I probably will because, hello, exciting!) I'd add more icing between the layers because I was really sparing because I wasn't sure I'd have enough icing to cover it as well. Moral of that story- always make more icing than you think you'll need. But still. Best. Cake. Ever. (Made by me...) 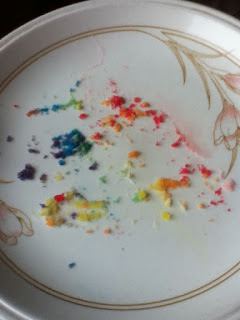