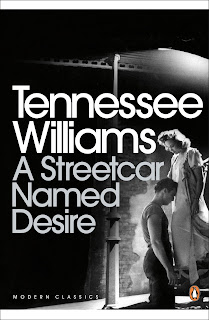 Angels in America might be my favourite play, but my favourite playwright has to be Tennessee Williams. So exceedingly better than basically any of his peers, if I had to see plays by only one playwright for the rest of my life, he'd definitely be the winner. (I've just realised this all rules out Shakespeare. Um... my favourite 20th Century American playwright? Whatever, he's just fantastic, ok?) A Streetcar Named Desire is widely held to be his greatest play, I'd pit Cat on a Hot Tin Roof against it and let them fight it out to the death, but Streetcar is, at any rate, his most well known play, not least because of the movie version starring Vivian Leigh as Blanche Dubois, and Marlon Brando as Stanley Kowalski.

And oh MY, what great casting that is. I mean, consider this, as a description of Stanley:


"He is of medium height, about five feet eight or nine, and strongly, compactly built. Animal joy in his being is implicit in all his movements and attitudes. Since earliest manhood the centre of his life has been pleasure with women, the giving and taking of it, not with weak indulgence, dependently, but with the power and pride of a richly feathered male bird among hens... He sizes women up at a glance, with sexual classifications, crude images flashing into his mind and determining the way he smiles at them."

I mean, I can literally think of no one better suited to play such a brute of a man as a young Marlon Brando. Just... *sigh*. And, I think this description is also a very attractive one in pure sexuality, and is pretty well known to be the definition of what Williams found attractive in a man himself. (Also, I think either his friends, or on the set of Streetcar they used to call him Blanche... and possibly he was in love with Marlon Brando too. But then, who isn't?!) Anyway, Vivian Leigh is also perfect as the fading Southern belle that Blanche is- she's almost like an older Scarlett O'Hara, if Scarlett hadn't figured out how to be self-sufficient and all (which, excuse me, would have made Gone With The Wind SUCK).

Let's talk about Blanche, while we're on the subject. I have such issues with her because, much as you're meant to feel sorry for her by the end, it's so difficult to see anything that's good in her. She's damaged, from the loss of her fortunes as well as her possibly homosexual husband (I'm not entirely clear what went down there, needless to say it was all bad for Blanche) but at the same time, she's really... irritating. She expects to constantly be accommodated, she demeans the man who's putting her up (not that he's exactly a saint either) and generally, she's annoying. She's also practically the anti-feminist- completely obsessed with the way she looks, and is trying to find a husband so she doesn't have to look after herself anymore. Consider this:


"Blanche: I want to deceive him enough to make him - want me...
Stella: Blanche, do you want him?
Blanche: I want to rest! I want to breathe quietly again! Yes - I want Mitch... very badly! Just think! If it happens! I can leave here and not be anyone's problem..."

Ah, Blanche- down with your sisters, I see.

Speaking of sisters, Stella is Blanche's, and she's a much more sympathetic character. She's gotten away from the old Southern world, and into the newness and excitement of New Orleans, and to be honest, Blanche just seems like one big interruption in her brand new life, and in the way she wants to be living. It's clear that Stella is kind of smothered by Blanche's personality, and while I'm not condoning Stanley's violence towards Stella (which is, to be fair, pretty much brought on by Blanche's presence, and I KNOW, not her fault either. But still), it kind of seems like Blanche is walking into a marriage that she doesn't understand, and with almost half a mind to drag Stella back to their old lives, as a last resort if she can't get a man to take care of her. What Blanche misses is the animalistic nature of their marriage, something which she's far too genteel to ever find desirable, but which Stella clearly finds intoxicating:


"They stare at each other. Then they come together with low, animal moans... Her eyes go blind with tenderness as she catches his head and raises him level with her. He snatches the screen door open and lifts her off her feet and bears her into the dark flat."

*SPOILER PARAGRAPH* I think the fact that Blanche can't understand their kind of marriage is because of the implication that Blanche's husband was a latent homosexual, and killed himself because of it (a bit of a violent end for him that maybe implies some kind of self-hatred on Williams' part...) although it also seems like she's not averse to having sex in order to try and obtain a man to look after her. I feel like this confusion on her part, and in herself, means that she underestimates the effect that her flirting and just her general attitude is going to have on Stanley, and while, let me be completely clear about this, I DON'T CONDONE THE RAPE, it's clear to see where it came from and how it came about. Which is a pretty great way for a play to progress, and one of the reasons that this one is so powerful. *SPOILERS OVER*

So basically, this play is incredible, far better than I've probably made it sound because, since I've read it a whole load of times, I've mainly highlighted the things that most bother me about Blanche, which, let's face it, are a lot of things. The thing is though, A Streetcar Named Desire basically has everything you could want from a play, and is pretty much better written than a lot of novels as well. If you really can't stomach reading plays then the movie version is a good alternative, but really, really, make an exception to your play non-reading and read this one.
Posted by Laura at 09:46