Devouring Books: I Remember Nothing by Nora Ephron 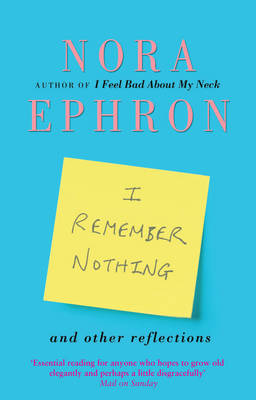 I'm going to keep this review short (and I've probably said this before, but this time I really really mean it!) because there's not a lot I can say about Ephron that I haven't said already (in my reviews for I Feel Bad About My Neck and Heartburn, respectively) and in I Remember Nothing it's basically more of the same. I mean this, not in a derogatory way at all, but more in a 'thank GOD' way, because, to be honest, if she was any less hilarious or wonderful than she is in those books, I would have been sorely disappointed!

The only difference in my feelings about I Remember Nothing and the other Ephron books I've read is that I liked this one even more! I don't know if its because of the gap in my reading of the others so that I forgot how awesome she is or what, but I definitely had a giant grin on my face for basically the entire time I was reading this book. The only thing about this that slightly concerns me is that, I recently read someone's review of I Feel Bad About My Neck (I can't remember whose... but if it was you let me know!) and in it they said that while they found Ephron funny and everything, they couldn't exactly relate to a lot of what she was saying because it was about getting older and what that's like and everything. And that kind of made me think- should I relate to Ephron less because I'm all young and stuff, and if I kind of think she's amazing and want her to be my best friend, does that make me an old lady?! On reflection, I'd say no- Ephron is the least old lady-ish of all old ladies, and I feel like, actually, she really forgets just how old she is. And I think that's wonderful- there's no reason for age to hold anyone back from doing exactly what they want, and Ephron seems to truly understand that.

I realise that last sentence just made me sound like a middle-aged woman trying to seize her own power... See the problems I have with being an old lady?! Anyway, I've decided not to care about this, and to just generally assert the fact that Ephron is hilarious and I'd still love her to be my best friend. I don't really know how to review this (and I've already promised to keep this brief!) because normally I'd say that 'well, I liked this essay, but this one wasn't too great', but honestly, I loved them all. And yes, many of them were about ageing, and what that's like, but there were also plenty about her past- what it was like being a journalist when that wasn't something women did, how she almost didn't write When Harry Met Sally; and a whole host of other interesting essays about an extraordinarily interesting woman.

You might not want to read this because you might not be a prematurely old woman like me; but I still honestly think that it's suitable for everyone, and of nothing else should convince you that, just because you are going to age, it doesn't mean that you will lose anything but your memory, and you can still remain as awesome as you've always been. At least, that's true in Nora Ephron's case, and she remains as hilarious as ever.
Posted by Laura at 13:11