You may or may not be aware that a little event that I call Christmas is less than a week away, and what that means is that I have urges to bake masses of things that no one wants to eat but which make me happy to make. Hence, the candy cane cupcakes. (This also means that I have less time to read things, which, you know, sad, but cake is so my Christmas priority!) These basically originated from some really crap attempts at candy cane cupcakes on Cupcake Wars, at which point I went, 'well, I can do better than that', so I did! 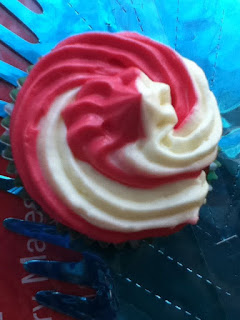 Yummmm, right? I mean, obviously you can't answer that. So I will for you. They're amazing! This is ostensibly because they're made with a mix of red velvet cake and Magnolia Bakery's vanilla cake, and then topped with cream cheese frosting, which can never be bad. It's definitely not because it's so so pretty, because I literally piped about 12 (of 36, see what I mean about the overbaking!) of these and then gave up and started just smearing the icing on top, leaving me with a load of lovely, mismatched cupcakes. Observe: 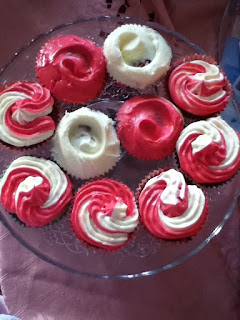 Lazy lazy me. BUT I had already mixed the two different kinds of cake in each cupcake case which took about ten thousand hours and didn't exactly turn out like I'd thought it would, but I liked the effect anyway, even if I did just kind of cover it up with frosting straight away (didn't think this one through...) 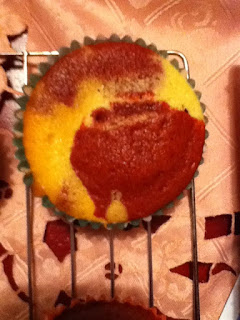 See what I was trying to do there? Not entirely candy cane like, but wholly delicious, and, I think, great for Christmas. Or, I don't know, a Tuesday. YUM.
Posted by Laura at 15:45