Devouring Books: Come As You Are- The Story of Nirvana by Michael Azerrad 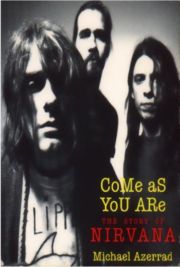 "Kurt Cobain's reaction to bad times was as direct as can be, and a hell of a lot more honest. He screamed."

There aren't even words to explain how much of a formative influence Nirvana had on me when I discovered them at the tender age of 14- all I can really say is that I was a completely different person before I found them, and after I did, everything felt different. Better. Or maybe I wasn't different, so much as that there was something inside me that needed an outlet that Nirvana (and, just generally awesome music) provided and from then on I felt better. More understood. Less alone.

That thing inside me? I think it's called adolescence.

Being less adolescent and vaguely better adjusted now, I inevitably listen to Nirvana a lot less now than I did from the ages of 14-17, but that doesn't mean that I forget exactly how much they meant to me, and it doesn't mean that I forget to appreciate the musical journey that they set me off on. I also find it impossible to forget that the 5th April is the day that the coroners say Kurt Cobain died, and that the 8th April (the day before my 5th birthday, if you want to get all exact) is the day his body was found. It is ever so slightly ridiculous to have something that happened when all you knew about music was nursery rhymes make you sad when your birthday is approaching, but I never said I wasn't ridiculous.

As a sort of tribute type thing, I seem to read a book about Nirvana around this time every year (last year it was this book about Dave Grohl, which... Was not a good book. Don't even bother.) and this year, Come As You Are, which I have had for the LONGEST time, was the lucky pick. It's the weirdest thing for me to read though, because it was originally published in 1993- as in, it was written when Kurt Cobain was still alive, which means that every sentence isn't filled with the anticipated sadness of the end. It's incredibly odd to read something like this:

"Kurt walks across the top of his amp stack. It's not that high off the ground, but he's riveting anyway, like a potential suicide walking along the ledge of a building."

and feeling like it's FILLED with foreshadowing, when actually it's a fairly innocuous statement when someone hasn't actually killed themselves yet. But still...

The fact that it was written in 1993 also means that there are some things in it that have been sliiightly left out/glossed over/are only half truths, but I only know this because I've read too many books about Nirvana, and besides, it's still interesting reading the story as told by the main person involved, because the things they leave out can be just as revealing as the things they say, and so reading this knowing all that I know... It's definitely interesting.

Interesting up to a point, because the thing about this book is that, whilst it's actually pretty awesome (I read it in about 3 days, and it's not really short...) it's also pretty much the base material for EVERY other book about Nirvana ever written. Which makes sense, of course, but it also means that I didn't exactly learn anything new, at least not in terms of facts. I guess, though, that the details are what are really important, and there were enough of those, at least for me, to make this book worth reading (and if you haven't read anything about Nirvana before, then it's definitely worth reading.)

Some of those details:


So, this was a bit of a word vomit, but apparently I can't read things about Nirvana without getting ever so slightly carried away. Call it a teenage obsession, call it whatever you like, but 20 years after this book was written, I still care about the people it's about. And that's what we call love, children.

"Kurt doubts the band will have any lasting influence, say, twenty years from now. 'Fuck no,' he says."