Devouring Books: The Girl Who Had Stuff And Did Stuff Trilogy by Steig Larsson 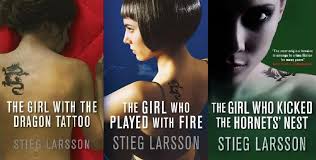 When I first announced my intention to read these books, the reactions of you lot ranged from 'oh yeah, I've never read them either' to 'OH MY GOD, DON'T DO IT!' and this was not what I was expecting because have you SEEN the praise heaped on these books? 'Best thriller in years', they said. 'Unmissable', they also implied. Obviously I'm just paraphrasing here, because these books have now been graciously rehomed in various charity shops, but that's basically the gist of it.

So what did I think? Something in the middle, I guess. There was a lot I haaaaated about them (and I mean really and truly hated. Abhorred. Couldn't even stand) but there were also things that made me think they weren't so bad, after all. I think it's important to note also that I read them in packing breaks, when I probably wouldn't have been able to focus on a book with even the slightest bit of smartness to it (sorry, Steig) so that has to be taken into account of the things I thought about them.

I'm going to do a teeny review of each book at the end (because, you know, I know you were all worried that wasn't going to happen) but here are a few generals:


So far, this seems like I'm pretty evenly for and against it, BUT my hatred for Blomkvist really outweighs my love for Salander (I haaaaaate him!) and I don't know if the clearly female-positive story lines are enough to balance out the really bad writing. I just don't know how I feel, so let's look at each book individually shall we? ('Oh yes, lets!', I hear you cry)

The Girl With The Dragon Tattoo
This was definitely my favourite of the three books, because it was a fairly self-contained story and it was fun trying to solve the mystery of the girl who disappeared from an island that was impossible to get off of secretly. Less fun were the parts with the rapes, but I feel like they weren't really gratuitous and were really there to serve the story. There was, however, a lot of unnecessarily complicated economic crap, including this 20 page section right near the beginning of the book that I'd imagine has tripped up nearly everyone who's read it. Note to writers: DON'T put a boring, rambling crap part right at the start of your book, what is wrong with you?! And then a similar thing happened at the end- the interesting part of the story was solved about 100 pages from the end, and then somehow the crap part was back and whyyyyy? But, overall, I liked it? So, I moved on to:

The Girl Who Played With Fire
I didn't dislike The Girl Who Played With Fire. I mean, sure it starts off with about 100 pages of things that have nothing to do with the story (seriously, was there an editor of these books? Because it sure as shit didn't feel like it) and sure there are loads of convenient last minute rescues and things when Larsson didn't want to kill a character off, but there was a lot more Salander! And eventually (and I mean, after literally hundreds of pages) you get to the crux of Salander's childhood, and that was kind of (hmm... very kind-of) worth waiting for. Plus it's all actiony and fairly exciting and I'd come this far so I figured, might as well read:

The Girl Who Kicked The Hornets' Nest
Annnnnd, what a mistake that was. This book had pretty much nothing to it. All The Things kind of get solved at the end of The Girl Who Played With Fire, and THIS book is pretty much Mikael Blomkvist showing how much smarter he is than A WHOLE TEAM OF MEN and also having sex with yet more women (obviously). Don't get me wrong, Salander still manages to solve a lot of her problems, and everyone else's, for that matter, but there are a LOT of pages for NOTHING new to happen in (I mean, stuff happens. But it basically just wraps up the second book. In SEVEN HUNDRED PAGES. God.) But, I mean, I kept reading it, so... Can it have been that bad? Maybe not.

Ha, remember when I said I was going to 'review' each of the books separately? Obviously I meant, 'tell you my feels about each of them' because reviewing? What's that?! But anyway. The crux of the matter is this: I'm pretty glad to have gotten these out of the way, and I'm really glad I read them before I moved so I didn't have to lug them up all the stairs. They're absolutely not the best books in the world, and I wouldn't want to read them again, but they did keep me entertained at a time when I didn't think I wanted to read anything, AND (and this is really important) if there was another book (and I believe there were supposed to be quite a few more) I'm pretty sure I've have read that one too. So. Take from that what you will.

Oh man, a whole post about Swedish books, and look what I nearly forgot!

*for 'marketed', read 'the way they changed the title and that'
Posted by Laura at 08:00