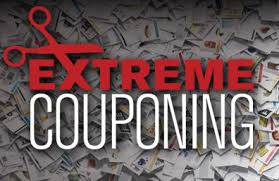 One of the most astute things that my dad (and maybe anyone) has ever said about me is that I only watch really really good or really really bad TV. It's so incredibly true that I couldn't even say anything about it, just nod in agreement because, yeah. Absolutely. I can't explain this paradox, but the fact is that I want to watch Breaking Bad and I want to watch Hoarders, and I don't want anything in between. The best or the worst, that's all I want.

One thing that no one has ever said about me, but which I know to be true about myself, is that I like to mix the highbrow with the lowbrow- talking about parts of pop culture in a ridiculously over-analytical way for what they are. And that's what you're going to get here, so I can try to justify watching all the Extreme Couponing Netflix has to show, except for the stupid episodes where they've messed with the format and made couponers compete against each other for some reason... That, apparently, is where I draw the line. Weirdly.

So, Extreme Couponing. It's an American reality show wherein people who coupon basically for a living get huge amounts of shopping worth hundreds (and sometimes thousands) of dollars for about $5. It is RIDICULOUS, and so much more exciting than it should be, and it's a shameful yet excellent thing to watch. There are quite a few reasons I suspect I'm so into it, not least of which is that you literally can't do this kind of thing in the UK. We don't have nearly as many coupons, there's no such thing as 'doubling coupons' (Americans: Your shops really do that?!) and most money off vouchers have small print that say 'cannot be used in conjunction with any other offer'. So, there's no possible way for me to ever be, say, paid to take things out of shops, so I have to live vicariously through these people.

A weird and unexpected side effect of watching Extreme Couponing has been that I've started to see the logic in doing what these people do. I mean, don't get me wrong- mostly I watched it because it's completely compulsive and also slides down so easily after a day of unpacking, but, of course, I've thought about it a bit more than that. At first I had a lot of criticisms, like 'whyyy are these people doing this in their free time?' and 'Do they really need that?' and 'Well, they can't get anything healthy with those coupons, anyway.' and it was like the programme had anticipated each of my criticisms and had an answer for all of them.

Like, 'whyyyy are these people doing this in their spare time?' Well, they're doing it so that they can save money. Or so they can support their extended family. Or because their husband lost his job (yeah, it's mostly women who do it...). I'm not saying there's not some kind of compulsion involved, but frankly, I think that if someone wants to do couponing instead of, say, a full time job, then I think that's an equally effective use of one time and also it's kiiind of the opposite of Capitalism, to which I say YAY. I have slightly more of a 'whaaaat?' reaction when people have a full time job, and in their spare time they coupon, because when do you start living, people?!

And 'do they really need that?' Well, they sort of do. Obviously no one needs a fifty year supply of toothpaste all at once, or an entire room for sweets (I actually do need an entire room for sweets, so) but on the whole, the people featured on Extreme Couponing kind of buy things they at least like (apart from this one woman who made her son eat cereal he didn't even like because it was free, which seems a bit against everything I'm trying to say here) and if they don't like them, or won't use them, then they donate them. And you can't really argue with that. Couponing for the good of humanity? That's cool.

'Well, they can't get anything healthy with those coupons anyway.' Well, for the most part, this is pretty true. I've seen people buy many many bottles of vitamin water, packs of oreo cookies, this same brand of noodles over and over again (there must always be coupons for them!), but, as the narration constantly reinforces, coupons for things like meat and produce and basically raw ingredients of all meals are pretty much like unicorns. So, I could watch with the smug belief that, well, at least I eat better than these people. BUT THEN I watched this episode with a vegan couponer, and well. I mean, what can you do with that? She must be pretty healthy AND she saves money. So, my conclusion is that you can be an unhealthy couponer, but you don't have to be.

Obviously, I've overthought this a LOT. But it's fun to do and I like it, so leave me alone! Here are a few random side effects I've experienced watching Extreme Couponing:


So basically. You probably shouldn't watch Extreme Couponing because MY GOD the amount of time you'll spend doing so, but if you feel a compulsion to watch really bad TV (I can't be the only one...) then you couldn't do much better, or in fact worse, than this. I love it, really.

*By crappier, I basically just mean not California or New York. Their couponing deals suuuuuck.
Posted by Laura at 08:30

Email ThisBlogThis!Share to TwitterShare to FacebookShare to Pinterest
Labels: Didn't have a book post for today, Shut up TV is awesome, Vegetables are the best