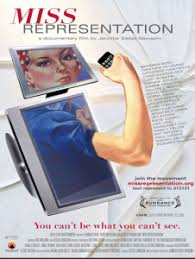 Miss Representation is a documentary that's been on my radar for the longest time- I actually get email updates from the organisation that either came from or made the film (I'm a little sketchy on the details, and I also don't even remember signing up for them, but there you go) that are essentially 'this terrible thing happened for women' or 'look at this awesome thing that happened for women'.

Needless to say, I get a lot of emails like this.

Anyway. So I'd never actually seen the documentary because I don't think it's out on DVD and it's been difficult to find online until, lo and behold, it appeared on Netflix one day! A few million episodes of Parks and Recreation and Extreme Couponing later, I finally watched it and I. Got. So. Angry.

At just, everything. At how, if you're a woman, you're only allowed to be on TV if you're really thin and really beautiful. At how, if you're a woman and you want to be a politician, instead of getting to share your ideas on how the world should be, you're really just opening yourself up to a discussion about your looks, style, and personality. At how, even though this documentary got so many powerful and successful women (Condeleezza Rice, Katie Couric, Rachel Maddow, Nancy Pelosi, Gloria Steinem) to talk about their experiences (not one of which was without sexism), you'd be hard pressed to think of many more women in the media who would even be qualified to talk about things like this because women are not valued in the media. At least not as creators of news, but definitely as objects of it.

So yeah, Miss Representation is about how women are represented (MISrepresented) in the media, and just how fucked up everything in the world is ever. The way I see it, it's like the women's movement happened, things got better for women legally and kind of socially and The-Men-Who-Run-Everything went 'shit! We can't let this happen!' and did everything they could to make women insecure, self-hating, body image OBSESSED and just generally made to feel as though they're not good enough for anything. This takes a few different forms, from airbrushing in every photo you see in a magazine so that some impossible standards of beauty are created, to abusing female politicians, mostly about the way they look, but also about the audacity of their decision to, you know, leave the kitchen, when obviously nobody wants to hear what they have to say. Because of their vaginas.

What it comes down to is this: The media has created an impossible, impossible situation for women where you have to be THE most beautiful creature in the whole world or nobody will like you, but at the same time, even when you are this most beautiful creature, you're not allowed to do anything because you're just a woman, and don't be silly, women don't have ideas or anything! It's not even just that though- it seems that, if women try to be or do anything that they're not expected to do, there's always some negative spin to be put on it- for example, I present you with this article about the fact that 3/5 of young doctors are female (How cool is that?!) and why that's a problem because you know the wimmins are just going to ruin everything with their lady bits and baby having.

AND it's not just that. Everywhere, everywhere, everywhere, women are UNDER represented on TV. There are so few TV shows that star women, and even less that are considered 'important' viewing, for the pure reason that TV shows and films starring men are supposed to appeal to both genders, whereas those starring women are only supposed to appeal to women. That is complete BULLSHIT, of course, and THEN so many movies that star women are really about men because, let's face it, all women really want to do is get married and have babies and that's IT. And it's the 'that's IT' bit that's really the problem because, you know, I think that is something that many many women do want, but what about everything else we want? Why is that never talked about and explored, and why doesn't anyone make movies about it, and why why why are we left with such shallow and flat and non-exploratory definitions of what women want and what motivates them and what else there is to life apart from men and babies?

I realise I kind of haven't talked about the documentary that much, but really the questions it raises from the evidence it gives are more important than the film itself. It's a good film- well made, well thought out arguments- it does almost completely focus on the US, but the US is fucked up enough to provide evidence for a whole documentary, and from that you can really apply it to other places (as I did to the UK, obviously) easily. It's going to make you really fucking angry, and you know what? You should be angry. You should stay angry. The way women are treated by the media isn't fair, it isn't right, and being angry about it, and voting with your remote control and NOT just letting it fade into the background of your thoughts is the only way to combat it.

This documentary has reminded me why I get so angry when people say that feminism isn't necessary anymore, and why I'll remain angry until I see as many women as men on my TV, in my government, in businesses, making movies and writing TV shows, and until those women are allowed to look exactly the way they want to look, not the way it works for the media to have them look to conform to some bullshit standards of beauty. Until, in other words, women get the same treatment as men by the media. I mean, come on. It's only fair, right?
Posted by Laura at 08:00

Email ThisBlogThis!Share to TwitterShare to FacebookShare to Pinterest
Labels: Didn't have a book post for today, feminist rant, Seriously...WATCH THIS