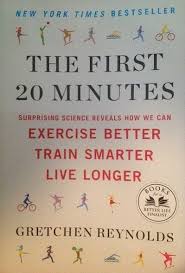 Ever since I've started running, I've become increasingly interested in reading books about exercise in general, and running in particular. The First 20 Minutes: Surprising Science Reveals How We Can Exercise Better, Train Smarter, Live Longer* was offered to me as a Kindle Daily Deal, and in my sleep addled state (I should not read emails about books early in the morning) went 'oh, it's only 99p? Sure, I'll have it', bought it, and expected never to read it ever because Kindle books are so easy to ignore.

I'd love to say there was some grand and excellent reason for my starting it, but if there was I really can't remember it. I'm pretty sure it was something like 'oh, I only have my Kindle with me? Let's see what this book about exercise has to say' and then, you know, I started reading. And then I had to carry on because, seriously, Gretchen Reynolds? Is HILARIOUS. This is ostensibly a book about science, specifically the science behind exercise and its effects on the body, and it could have been really really really boring. But Reynolds makes sure that doesn't happen because she's basically my favourite person in the world right now.

She's pretty much the reason I'm reviewing this book at all and not just keeping it quietly to myself, because I know that a book about exercise isn't really going to be that interesting to most of you (although it totally should be and this is actually the best so you should definitely read it) BUT Reynold's voice is just so excellent that I couldn't let this one pass me by without comment. In my research (google) for writing this, I discovered that she's the Phys Ed columnist for the New York Times, which makes sense because her writing is excellent and her sense of humour impeccable.

So. Before I turn this post into a series of quotes by Gretchen Reynolds, let me just tell you a teeny bit about the book. More or less, it's a collection of all the latest studies into exercise and what it does to the body, and how they refute a lot of myths about exactly how you should exercise. There's also stuff about genetics and what they mean for exercise, as well as gender differences and aging and all sorts of other interesting AND useful stuff. Whilst I was mostly highlighting Reynold's awesomeness while I was reading, I was also highlighting things that actually seemed important and useful to remember. The book is also cleverly structured so that, at the end of each chapter, the most important information is in numbered lists, which means that it'll be easy to go back to and get a little refresher about what I should be doing, and not doing. Basically, it's been well worth its 99p.

But, most importantly, I wouldn't have finished it at all if Reynolds hadn't made everything sound so interesting and funny, so here's to her and her awesomeness:

"The Swiss... yodel through 9,650 steps a day and, despite the ready availability of Lindt chocolate, have a national obesity rate of barely 8 percent."

"In a study from New Zealand, a group of untrained men in their twenties were brought into a human performance lab and allowed to determine the intensity of their warm-ups on stationary bicycles. They spontaneously started competing with each other and were subsequently too fatigued to complete a cycling power test, a result that may say more about 20 year old males than about the hazards of a too strenuous warm up."

"Painful as it may be, skip that celebratory post-workout gelato, unless you are one of those exercisers who worry about keeping weight on, in which case keep your problems to yourself."

"Overtraining is particularly common, in fact, among people who are most dedicated to their training (I've never overtrained.)"

"[on a study that showed aged mice who exercised remained young compared to the ones who didn't] While Dr. Tarnopolsky, an athlete for most of his life, was relieved to see that the active aged mice had kept their hair, his graduate students were more concerned with the animals' robust gonads. Their testicles and ovaries hadn't shrunk, unlike those in the inactive elderly mice. 'I think all my researchers exercise now,' he said."

And that, my friends is only a snapshot of her wit and hilarity. I never expected this book to make me laugh, but it did that, as well as teaching me some pretty interesting things about exercise. Let this be a lesson to you: Kindle Daily Deals are awesome and well worth bankrupting yourself for when all those 99ps add up...


*that's the only time I'll be typing out that whole title, if that even is it's whole title... Is the second part just, like, a mission statement?
Posted by Laura at 09:36