Devouring Books: The Harm In Asking by Sara Barron 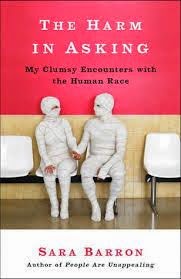 I mentioned a while ago that I'd accepted a couple of books for review for the first time and it was all very exciting. I've always been very, very cautious about doing this, partially because I've got SO many books already that I'm like 'ughhhh, what if this sucks and I could have been reading something awesome and then I have to spend even more time SAYING stuff about it and ugh'; and partially because I'm always concerned I'll feel obligated to be even vaguely nice about it even if it sucks because, you know, I'm nice.

I'm not going to be vaguely nice about this book. I am going to RAVE about it because, seriously, it's hilarious. When I got the email about it, I figured, you can't go wrong with a book of funny essays, and whilst that's almost definitely not true, it was definitely the case for The Harm in Asking. I read it during the 24 Hour Readathon, and it wasn't a hardship to get through at all- I laughed, and I laughed, and then I laughed some more. And I'm not talking the kind of laughing where you sit and smile and are laughing a bit in your head- I'm talking actual out loud laughing, which hardly ever happens for me when I'm reading. When it does, I take note.

The Harm In Asking is essentially a memoir in essay format, mining gems from Barron's past for comedy value and the awesomeness factor, and generally being hilarious. It's the kind of book of essays that Hannah Horvath from Girls* would probably like to write, except she doesn't really have enough self-awareness, or self-deprication to do it. Barron's essays, whilst self-absorbed (very Hannah), contain juuuuust enough awareness that the things she has done and the ways she has thought are ridiculous so that it doesn't get annoying, or awful, or anything but, you know, funny.

I know what you're thinking. This is a book of essays about a person you've never heard of. Why should you care about her life when you could just read, say, Why Is Everyone Hanging Out Without Me? and find out more about Mindy Kaling? Well. You should definitely read Mindy's book too**, but you should definitely read this too, because where else are you going to read about someone's chronic and hilarious farting issues, their myriad of unsuitable and INSANE roommates, that time this guy she liked asked her to be his pimp, and her issues with needing sympathy and A LOT of acknowledgement and recognition. Which she recognises is a problem.

The main appeal of these essays, or at least the main reason I found them funny, is that Barron gets into a lot of situations because she's trying to be cool, and messes them up so badly that she ends up being horribly uncool instead. This kind of secondhand embarrassment is something I find really funny, not least because, you know, it happens to all of us! But at least this one isn't. I also massively appreciate that Barron talks about things that women aren't really 'supposed' to talk about- farting, masturbation, having an imaginary dog... Ok, that last one probably isn't something anyone should talk about...

Essentially, I came away from this not necessarily liking Barron, but kind of believing she's basically the most hilarious person ever. It seems like she'd be exhausting to hang out with (not because she makes you do loads of ridiculous shit, but because of that acknowledgment thing) BUT that it would be worth it because of the hilarity. As I've said, without the self-awareness that she has, this could be awful, but because Barron is aware of the ridiculousness of her actions, she can point it out to her reader and go 'look! Look how ridiculous I've been!' and you see it and you laugh. It's pretty great.

And if all THAT isn't enough to convince you that you want to read it, let's have some quotes:

"I hoped to meet a woman of this description and to make of her a ladylove. For to begin my lesbian exploits while I was in college? While I was in New York?
I could think of nothing more unique."

"The sister was not amused.
'What the fuck?' she screamed.
And then I farted in response. It was not intentional. It was merely the choice my body made on my behalf."

I mean, right? Go and read this. I have given it my seal of approval and also laughter. It's pretty great.

*From me, this is a compliment, but I get that she's not everyone's cup of tea. But stick with me on this, it's going to be great.
**Even if I can't mention it without saying how much the title essay annoys me. It annoys me so much!
Posted by Laura at 08:00