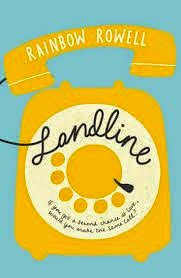 After seeing Rainbow Rowell, I read Landline literally over two days (not the day after I saw her, because FRANCES was here which was awesome) because I didn't know how to stop reading it. I never really do with Rainbow, so this wasn't a surprise, but it was pleasing to know that, you know, she's still got it.

Now. I also read Landline about 6 weeks ago, so excuse me if my memory of it sucks. The story essentially goes like this: Georgie McCool (best name ever) is a woman whose marriage to Neal is in trouble because she has to work over Christmas and Neal is a whiny baby. Excuse me if I'm oversimplifying, but that's definitely how things seemed to me at the start of the book, but as it goes on, and we learn more about their relationship, we find out that things have not been right in the state of Rome for a while now. After her family leaves for Nebraska, Georgie finds a connection to the past through her old landline phone, and tries to retrospectively fix, well, everything.

It's actually a weird plot, now that I've written it like that, but it's definitely much better than I've just made it sound. There is SO much that I really loved about it, so let's just get right into that. Firstly, there's Georgie. She's really just trying to do her best, and I love that so much about her. The reason I say Neal is a whiny baby is that she's working over Christmas because this is LITERALLY her one shot at having everything she's ever wanted for her career, and it bugs me that he can't just go 'don't worry about it, we'll just do Christmas after you're done with the work.' PERSONALLY I'm pretty sure this story wouldn't have even happened if Georgie had been a man, and 'needed' to work over Christmas because George's (see what I did there) wife would have gone 'yes dear' and no one would have had a meltdown.

However. It's more complicated than that, and that's really a credit to the story. There are all sorts of elements coming into play, old jealousies and many things from their past that are widely explored along with the present day (which also turns into a storyline from the past... Hmmm...) narrative. And it's so good. Seeing how Georgie and Neal got together in the first place was a welcome shift from the fraught events of the present day, and it was also HELLA cute. You know how it goes.

There are SO many more things I liked about it but in the interests of keeping this short(ish) and sweet, I'm just going to say... It's set at Christmas! I do love an out of season Christmas book, but I love reading a Christmas book at Christmas, too. So what I'm saying is, if you haven't read this yet (and I know you guys, so I know you probably have) I recommend saving it for nearer Christmas time because, even though it's totally not happyhappy all the time, there are parts that will warm your heart so incredibly that you'll want to hug the book and never let it go. Not that I ever did that... Ahem...

AND (I know, but I'm nearly done) oh my gosh the secondary characters. I think we ALL know that Rainbow can write an excellent secondary character (Reagan, anyone?) but Georgie's mum and especially her sister are GREAT, her writing partner Seth is ridiculously smooth (and awesome) and even her kids are chock full of personality. I know that I giggled (OUT LOUD, no less) when I was reading this, and there were so many awesome lines that I just couldn't write down because I couldn't put it down.

So basically- of course this is good. It's better than good, it's awesome, and on the scale of Rainbow Rowell books, it comes... near the top? THEY ARE ALL AT THE TOP (seriously, I don't even know how to rank them or anything because I love them all for different reasons, like how you love your children, I guess). Basically, you've got to read it. Obviously.
Posted by Laura at 17:00