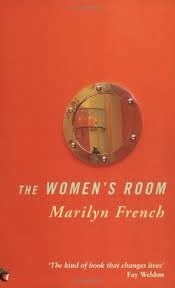 "What I'm trying to understand is winning and losing. Now the rule of the game is that men win as long as they keep their noses comparatively clean, and women lose, always, even extraordinary women."

The Women's Room is a book I hadn't even heard of until I saw it in a charity shop when I'd left the house without a book and needed something to read. I guessed, from the title, the blurb, and the fact that it's 'the kind of book that changes lives', that it would be feminist to a certain degree, but what degree that was I didn't know until I started reading. And oooooh, boy...

So, The Women's Room is sort of the tale of one woman, Mira, and her journey from excessively smart child, to reluctant wife and mother, to a divorced woman, to a graduate student. It's sort of about her, but it's also about all the women she's known, during all these roles, and the individual stories each one has to tell. It's written in such a way that you don't necessarily remember all the characters, and what they did, but you remember their stories because they've probably happened to you, or to women you know. Although it's fictional, The Women's Room does strongly relate to the roles and positions of women in the late 60s and early 70s in America.

Predictably, I loved it. It's not the kind of book you're going to like if you don't like authors strongly pushing their own agenda in a novel, sometimes to the detriment of narrative, but, having almost started my literary education with The Grapes of Wrath, I think that's something I'm ok with. There's a lot in this book that, even though it was written in the seventies, still resonates today, although there are some things that I think have improved, which is kind of a relief. I wouldn't say The Women's Room changed my life, but I can imagine that, as a woman right on the brink of second wave feminism, it might have been an earth shattering kind of read.

While this book mostly focuses on the women (obviously), the parts where the men are talked about are the parts where I think the most has changed. In Mira's married years, the men are described as kind of unknown entities, even to themselves. They're unadventurous, they go out to work and they come home, and expect certain things from their wives that their wives dutifully oblige*, and it's all very very Stepford wives-y (only it's not because we get to know how the women feel about all this). I feel like this is one part where things have changed, or are at least getting better, if only because people want more than they've had before and so both halves of couples tend to work now. I really do feel like the advent of feminism has made more men (I know not all men, of course not all men) willing and pleased to have equal roles in a relationship. So there's that.**

There are also parts in this book where women as male property is discussed, and there's even a passage that reads a lot like a recent thing I've read about women being disgusted that they have to say 'I have a boyfriend' before a man will leave them alone, because any reason like 'I don't like you' isn't good enough for men to leave them alone, only seeing the woman as another man's property will do that. Here's that passage:

"That a woman was not marked as the property of some male made her a bitch in heat to be attacked by any male, or even by all of them at once. That a woman could not go out in public and enjoy herself dancing without worrying what every man in the place was thinking, or even worse what they might do, seemed to her an injustice so extreme that she could not swallow it."

I mean, right?! In a way, I feel like this is a thing that's only gotten worse- in that, in my theory of utterly unproven investigation, I feel like, as much as some men have gotten better because feminism exists (see above), some have also become threatened by the whole idea of women being stronger, and encroaching on their territory, which I think has led to an increase in things like domestic violence, and sexual assaults and even just general assholery from men towards women.***

Basically, The Women's Room was everything I didn't know I wanted it to be. I think there were points where I wanted to know more about all of the women, but their stories were just included as cautionary tales to be moved on from as soon as possible, but on the whole, the wide variety of women's stories**** was just so interesting, and enveloping, and also kind of eye-opening. I suspect this was even more eye-opening to women who were just beginning to wake up to the idea of feminism, and I think this is just as important to read for its social history as it is in itself. But, what it is in itself is a damn fine book, so I guess it's kind of a win-win situation.

*Didn't that sound overtly sexual? It wasn't supposed to! I just meant, like, their dinner on the table, the kids in bed or at least clean already and so on.
**I know the whole issue is a lot more complicated than I'm writing about here, and studies show that women still do more housework and are expected to do the child rearing and I could go on about this for days, but for the sake of brevity, I'll say that things seem better, on the whole, than they are in this book and that's all I've got for you.
***I'm definitely oversimplifying here and, again, there's TOO MUCH to say that I'm not going to bore you with right now, BUT just as a flipside to my own argument, it could just be that domestic violence and sexual assualts and general everyday sexism are just more reported now than they have been before. Which is depressing in itself.
****That should probably be white, middle class women's stories, but there is at least a little bit of discussion about race that I appreciated
Posted by Laura at 08:00