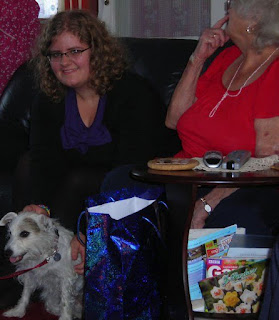 Look, I'm a friend of the animals! Actually, this is a really rare sighting of me with a live animal. And I probably ate craploads of meat for dinner.
This week... I've still felt fairly lousy so I've really been taking it easy, combined with some gentle household tasks and whatnot. Mum was supposed to have chemo on Friday but her blood counts and stuff weren't good enough, so we're to go back next week instead. Which... is pretty annoying, cause it just makes the whole thing that much longer, but obviously I don't want her to be poisoned and all if her body can't take it. The plan for this week is to feel better- although I totally see a trip to the doctors in the cards if I don't.

So, that was the week. Now, allow me to talk about something more general/probably more interesting! I realised that around now-ish (I think technically Friday, actually, but whatever) I've not eaten meat for 4 months, and I know you've all just been thinking, 'hey! How's that going?' but you've just been to shy to ask... Ahem. But really, I have some observations on the subject, so I'm going to share them, whether you want to hear them or not.

Firstly, I would say that, if you go into non-meat eating expecting that you'll get crazy skinny, then dispel such illusions now! I wouldn't necessarily say that I've gained weight (I did that around Christmas time, and, bless it, it hasn't wanted to leave me, mainly cause I haven't encouraged it to do so in any way) except I probably have because learning to eat in a new way is HARD, and it's often just easier to fall back on carbs then to figure out how to make some kind of beanburger or something. I mean, I'm sure it's possible to lose weight whilst not eating meat (and actually, it's probably really easy) but I haven't really mastered that yet.

But how do I feel, I hear you cry? Well, pretty much the same. I mean, it's difficult to say, cause I've been feeling pretty rough for like two weeks now, but this isn't something that I attribute at all to not having meat in my diet, but more to being run down and kind of stressed and worried for, oh, I don't know, FOREVER? Or, like, 6 months or so... But before these two weeks? I don't know, I guess maybe slightly healthier? When I manage to actually avoid sugar like I try but inevitably fail to do? I definitely feel like sugar's a bigger factor in making me feel like crap than meat eating/non-eating, so, yeah, definitely need to work on that...

And here's a thing- I feel really uncomfortable referring to myself as a vegetarian. Like, I'm not sure it's a thing I've said out loud yet. I'm not sure if that's because I feel like I don't have the right to call myself that until I've been meat-sober for like a year or something, or for some other strange and surely justified by my brain reason, but it's really weird- has anyone else converted and had the same issue? It's not that I think I'm going to backslide and like stuff ALL THE ANIMALS into my face at some point, because I kind of don't even think of meat as food that I can eat anymore- it's sort of been consigned to the 'foods Laura doesn't like list' which, believe me, is MUCH longer than the foods Laura does like list. I'm not saying that I haven't been tempted by the ridiculously good aroma of cooking bacon; but also, little piggies! So yeah, I don't know why the reluctance to say 'I'm a vegetarian'. Maybe I just don't like labels...

So, basically, that's about all I know so far about being a vegetarian. I also know that it's very tricky eating out nowadays, but for a normal person who likes normal types of food, it totally wouldn't be (I've only had to order from the kids menu once, but what sort of restaurant offers more vegetarian options for kids than adults? Exactly). Oh, and also, I don't feel bad when I see the sheep that live right near my house anymore cause I wouldn't even dream of eating them (not that I ever really had that much lamb. But still) or like any animals ever, so that's good!

Basically, this is what I want to say- giving up meat isn't the easiest, but it is easier than I thought it would be, and I feel pretty good just like, morally, not eating it anymore. So what I'm saying is, if you want to not eat meat anymore but you still do because you think it'll be too hard not to, then hi me of 4 months ago! How are ya? Just know that you can do it (if you want to, I'm not really aiming to convert anyone here) and that it'll make you feel real good following through on what you believe in. Honestly, it will.
Posted by Laura at 12:26