Sunday Sundries: Wrapping a few things up, Starting something new

Once again I have to go to work for I am a FOOL so I'm super grumpy about that. ALSO once again, I haven't taken photos of my room because it was tidy for about a day, then I went to my parents' house and my mum made me sort loads of stuff that I left behind and I had to bring it back here and I haven't put it away yet because of reasons. 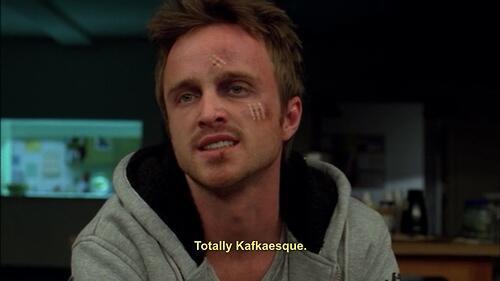 It was. Probably.
But it's fine because I have other things to report on and also I don't have anything particularly interesting to write about for next week so that is when it shall be. (I will basically just promise you a room tour, weekly, until I actually do it, ok? Cool.)

So! The things to wrap up. FIRSTLY: There was a Halloween Ninja Book Swap! It was AWESOME. 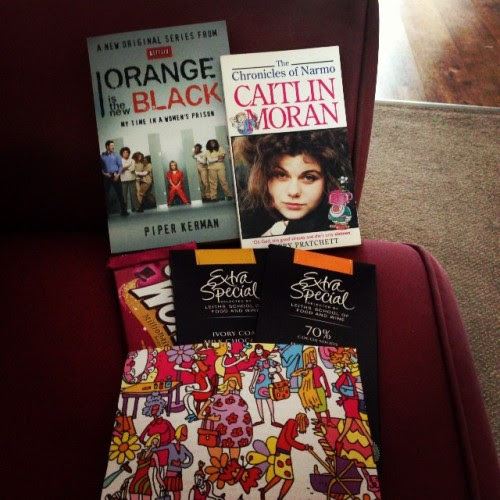 See, see! I am ridiculously late in posting about this because it's been nearly three weeks since I got this (I KNOW. I am terrible) in the post from Hanna who is miraculous and wonderful and THE BEST and knew exactly what I wanted better than myself, clearly! So obviously you can see this from the photo, but there's Orange is the New Black in book form which I am REALLY excited to read because you KNOW I loved the TV show (I've talked about that, right?)

and and and then there's ALSO The Chronicles of Narmo which is the novel Caitlin Moran wrote when she was like 15 (I know. Precocious or what?) and I have read it already and it is AMAZING and it's the kind of book where I knew I wanted it but I may never have bought it and yeah. SO GOOD. And also also all that chocolate, which I have somehow managed not to eat all of yet (I know! I have seriously only eaten the orange chocolate one) and a lovely letter and it was just the best ever best thing and I love it and seriously, this ninja book swap thing is the BEST, and you should allllll do it.

So that's the one thing, and thank you again, Hanna, for your amazingness (ALSO- there is another book! That's she's going to send me! Which is crazy because whaaaat she already gave me two books! I know.) THE OTHER THING: RIP VIII! That was a thing that happened. And that only finished a few days ago, so I am right on time with this one. The thing with RIP VIII is that, even though I feel like I didn't really read any books for it, I actually read a fair few books for it (as in, way more than the four that the challenge basically asks for) it's just that, compared to the last couple of years (where I read ALL THE BOOKS for RIP) it was kind of under-achievementy. It fell short of my usual standards, shall we say? We shall, for I just typed that.

But anyway. I did read things for RIP VIII, and here are all my reviews, conveniently gathered in one place:
The Cuckoo's Calling by Robert Galbraith
The Girl Who Loved Tom Gordon by Stephen King
The Girl Who Had Stuff and Did Stuff Trilogy by Steig Larsson
The Stepford Wives by Ira Levin
Warm Bodies by Isaac Marion
Rosemary's Baby by Ira Levin
(Presented in rainbow form so they're less scary and stuff)
So yeah, I've kind of cheated because I finished The Cuckoo's Calling and The Girl Who Loved Tom Gordon in August BUT I reviewed them in September so IT COUNTS and also The Girl trilogy thing was three books that had one review so I had to make up the numbers somehow.

And that is basically everything up to date. Yeah! And then there's the new thing I'm starting, and that, my friends is NaNoWriMo. Which, if you don't know, is National Novel Writing Month, wherein people who are insane attempt to write 50,000 words in November, and... I am one of those insane people. The thing I'm basically saying here is, I don't know how much I'm going to be bloggering this month because of all the other writing (last year I did the LEAST blogging in November of all the months, so yeah) but it'll be fine and you'll all survive. I may not. And possibly nor will my self esteem, but I will have a really bad novel written! Yeah!

So yeah, that's me. What are you doing with your entire November?
Posted by Laura at 08:30