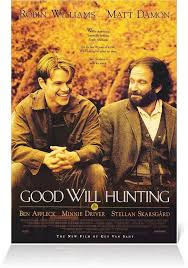 I had never seen Good Will Hunting until the other week. When I told my housemates that I'd watched it, my friend Becci was shocked that I hadn't already seen it, because it's kind of the epitome of a film that I would have seen. She was right to be shocked- after I'd seen it, I wondered exactly what the hell had taken me so long, and also some other things that we'll discuss in this review.

One of the main reasons I think I hadn't seen it was because I got slightly confused about exactly what film it was. I thought it was that one where the guy is autistic* or something but is really good at maths, but it turns out I was thinking of (we think) A Beautiful Mind? But anyway- the point is that I was not at all prepared for what I was going to get out of Good Will Hunting, and that's a beautiful thing in itself.

Good Will Hunting is the story of (Good) Will Hunting (Matt Damon) and his generally fucked up life. An actual genius (as in, a genius without even having to try), Will is working as a janitor at MIT when we first meet him, and he solves a mathematical problem in about 5 minutes that took Papa Skarsgard FOUR YEARS to figure out (Papa Skarsgard being a maths professor but not an actual genius). When Will's talent is discovered, rather than running towards the opportunities this creates for him, he shies away from having to do anything at all meaningful with his life. Enter Robin Williams, therapist extraordinaire, Papa Skarsgard's old roommate, and all round good guy. Does he fix Will? You're obviously going to have to watch it to find out.

What I want to talk about, really, are a few key scenes from the movie that really really touched me in a number of different ways. I honestly feel like I learnt a lot about myself watching this film, and that doesn't happen too often, especially when I'm not expecting it. It disarmed me, and kind of made me cry a bit, because, well, you'll see. Let's discuss (mild spoilers here, I guess? But not massively bad):


So, yeah. Life lessons aplenty, and really just a very very good film even if you don't need a good stern talking to via film. You've probably seen it already since it's about a million years old (or... 16?) but I think that for me, it's always going to be one of those things I've seen in the right place at the right time. And I'm really glad I did.


*Excuse me, IMDb tells me that Russell Crowe's character in A Beautiful Mind was actually schizophrenic. So there we go.
**I realise I am doing this all wrong, but I really can't be bothered to look up all the character names, and I only know Will's because, you know, it's the title.
***After typing this paragraph, I genuinely started looking for a new job. The power of film, people.
Posted by Laura at 11:38