Things I Read In September 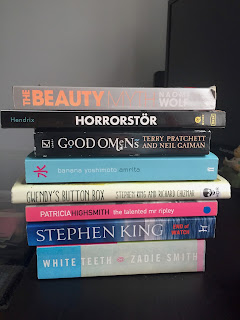 Oh man. Let me tell you, everyone, moving to somewhere you have to get the bus both ways to work does actual wonders for your reading levels. I feel like I've hardly read at home (this is not entirely true) but I still managed to read a hefty 10 books in September- more than any other month this year, and not one of them was a comic book!*

That being said, I'm still going to try and keep this monthly reads post short because MANY of the books were RIP reads and I'm trying to review them... Since this is me, we'll see how well that goes. But still here are the books (mostly- hey guess who read a couple of digital books this month!):

White Teeth by Zadie Smith
In the interests of full disclosure, I read most of White Teeth in August, but it's still the first book I finished in my new home! It was interesting- there's a lot in it about race and British society and all sorts of twin things (I like twin things...) but for me it didn't quite come together as nicely as it should have, although it does come full circle rather exquisitely. I didn't hate it at all, I just wasn't in love with it as much as with, say, On Beauty.

End of Watch by Stephen King
As you may have seen, I'm all up to date with Stephen King reviews! (this is both a yay, and a boo). You can find the review of this one here, but let's just say that this is just an excellent detective story and I really couldn't get enough of this trilogy. I mean, you gotta read them all, but this one was especially excellent because you get some supernatural King as well as the thriller-y stuff.

The Talented Mr Ripley by Patricia Highsmith
Oh hey, another book I've reviewed already! THIS WAS SO GOOD, you have my infinite recommendation and you can talk with me for hours about how intricate and also just fucking thrilling it is, ya know?

Undermajordomo Minor by Patrick Dewitt
Patrick Dewitt is, of course, the genius behind The Sisters Brothers, so it is frankly shocking that it has taken me so long to read Undermajordomo Minor. A couple of things put me off- in a minor (haha) way the title did cause wtf does that mean, but if I'm being honest, it's mainly that it was trapped in my Kindle app and can I read digital books? I cannot. HOWEVER. I took my iPad on a train with me with the intention of reading The Fireman but it wasn't downloaded and no wifi and yadayadayada. I hadn't bought another book with me to literally force myself to read on my iPad, and so this is the book I chose.

TL;DR, Undermajordomo Minor is great. It's like a really fucked up fairytale where places are left purposely vague and where very strange things are happening. Thieves are kind of heroes and Dukes are crazy and Undermajordomo is a made up title for Mr Minor's job and that is where the title of the book comes from. I say it's a fucked up fairytale, and it's kind of part that, and partly a drawn out version of The Aristocrats (the joke, not the disney film with cats). I liked it a lot and it got me through a train journey and its return so what more can you ask for, really?

The Fireman by Joe Hill
I finally did download The Fireman onto my iPad (I did have one terrible and dark day where the battery died and I had to read it on my phone though) and it is SO FUCKING GOOD. I started reading it ages and ages ago but stopped because iPad (are you sensing a theme here?) but it is so fabulous I can't even. I want to fully review this because RIP read, but there is so much drama and terror and end of the world stuff and even the ending is so amazing and I just can't even. I could barely stop reading it to get off the bus and get to work, and not just because I hate my job at the moment.

Gwendy's Button Box by Stephen King and Richard Chizmar
Hey, I already reviewed this too! I really can't recommend it enough- it's a teensy story but contains so much, and it turned out to be so different from how I imagined it to be. A++

Amrita by Banana Yoshimoto
I love Banana Yoshimoto so much. Amrita is, I believe, her only full length novel (and in the afterword she implies that she'll probably never write another) and even though it's good and I liked it, you can definitely tell that it's one of her earlier works. What I mean by this is that, it has many of the hallmarks of her earlier work, with its dreamlike qualities (and actual weird dreams) and mystical things happening alongside everyday events, but it feels in parts too drawn out, and almost like it should have ended already. Had each of the ideas she goes with in the novel been presented in a different short story, it probably would have been a better book, but at the same time, I'm never really bored or disappointed reading her work because the writing is just too good. So, an inconclusive shrug, I guess, but I still lean towards liking it rather than not.

Good Omens by Neil Gaiman and Terry Pratchett
Ah, so many books to review, so little time. THIS IS PRETTY AWESOME, just like everyone's been telling me for years. It's just such a British look at the end of the world and I liked it a lot and I'm also going to try and write a full review of it so watch this space.

Horrorstor by Grady Hendrix
Hey, this is that horror story about Ikea that everyone read about three years ago, look at me I just read it! (in case you're counting, this is easily my fourth RIP read, but I'm probably not going to review this one fully so does it count? Of course!) I feel like most people were underwhelmed by this but I actually really enjoyed it- it creeped me out just enough to feel sort of uneasy on the bus, and I liked the underlying horror and the backstory to the reason for the horror. I liked just about all of it, actually, and the end just leaves me free to imagine well, of sorts of different possible endings, all more grisly than the rest. It's pretty good, and if you're one of the few people who still hasn't read it, I am totally giving you permission to.

The Beauty Myth by Naomi Wolf
Maaaaan, this book. This fucking book. This fucking book deserves its very own review but I doubt I'll have time to write one, so let me try to be awed but brief. This book was written in the 80s but is equally, but probably more relevant now. It's depressing that this is the case, but there you go. Wolf writes about how women are made to feel bad because of how they look, and constantly told that they are less than, that they are defective in some way, that they need surgical correction, and they need to be thinner and they need to do all sorts of things to make them acceptable to the world. Wolf suggests that all of this, all of this pernicious and horrible propaganda is all manufactured so that women are kept distracted by their appearance, are kept poorer to maintain their appearance, are left weakened and tired and hungry by trying to reach an 'acceptable' weight, and this is all a trick and a way of keeping us distracted and too tired to deal with the real problems at hand (you know, men) (ok, fine, the patriarchy).

I feel like I'm probably one of the people who least needed to read this book (I'm pretty chubby and I don't wear makeup and I still think I'm a divine creature) but SO MANY PEOPLE DO, and not just women, to be honest. Basically, embrace yourselves ladies, you are already beautiful and divine and you deserve to be whatever you want to be. And if you don't believe me, read this book.

BOOM that wasn't really short, was it? Many sorries. But hey, I read a lot of books and basically all of them were good so yay reading! Who knows what joy there is to come in October...

*Not that comic books are bad, OF COURSE, just that they don't take long to read**, you know how it is.
**Except Watchmen. Hey, you should read Watchmen.
Posted by Laura at 08:30