Hello hello hello litle readers! There has been some radio silence here, which I can't really explain except to say that, you know sometimes you feel like there's nothing really going on and sometimes feel like every moment of your days have been filled? For me, it's been the latter this month, and so blogging (as always!) has fallen by the wayside.

So what have I been doing, I hear you cry? Well. Tons and tons of reading (I made a goal to read 100 books on my 30 before 30 list, and welp, I'm 5 books away with like 8 days left... but guess which readathon there is this weekend!), wedding crafting (yes, already), and an upsetting amount of work (end of the tax year, innit). I also decided, one month before the final season's premiere that I would rewatch all of Game of Thrones (smart) so that is taking up quite a lot of my time, along with just the general seeing of people and living life and omg enjoying the spring that has joyfully just sprung!

But, you know, the books are the thing. But what were they? Let's take a look. 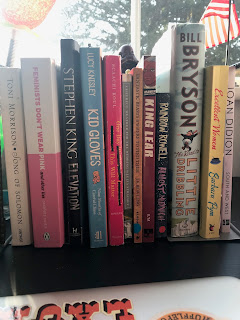 GLORIOUS (apart from the photography, obvs). Let's discuss (relatively briefly, because LOOK HOW MANY)

Song of Solomon by Toni Morrison - This was one of my last reads from my 30 books before 30 list, so in theory I will review it fully (you know, one day) but I found this kind of magnificent - the story of a family and of a town with a pleasingly circular conclusion and a ton of heartache and just, ugh, you know? So good.

Feminists Don't Wear Pink (and other lies) by Various - Look. I really wanted to love this book, but for me it was just a little tiny bit too much like introduction to feminism as opposed to the advanced feminism that I think I'm looking for (*guiltily eyes primary texts like The Second Sex that she STILL hasn't read*) I think there is a place for books like this for, you know, people who need to be introduced to feminism, but for me, the essays were too short, and the sentiments a little too much like 'oh I realised you can still be a feminist AND be girly!' for me - at least for the most part.

Elevation by Stephen King - As a person who is up to date now with Stephen King reads, I really have to object (on behalf of whoever bought this for me for Christmas) to novellas being produced in hardback and sold for the same price as a lengthier novel. Now that that's off my chest... I obviously need to do a full review of this (LOL) but I found this pretty good - King is into social justice again like for that bit of time he was a feminist, and even though he does these things clumsily, he clearly cares and I am here for it. An odd book, probably not worth the giant amount it cost but it's Stephen King so yeah.

Kid Gloves by Lucy Knisley - I HAVE BEEN WAITING FOR THIS BOOK FOR FOREVER! I genuinely believe this may be my most anticipated book ever (I preordered it in, like, September even though amazon FAILED ME and didn't deliver and also, fuck those guys) and it did not disappoint. It was a little more harrowing than I was expecting, not really knowing about Knisley's baby experience, but it was so good and thoughtful and interesting (history of pregnancy, yo!) as I have come to expect from her books. I read it the night I got it, so... enough said really?

One Day We'll All Be Dead and None of This Will Matter by Scaachi Koul - The final book on my 30 reads before 30 list (or at least the last one I'm intending to read - more on this in another post) this was also the hardest to find, which is a shame because it's good! A better than your average collection of essays on growing up as an Indian-Canadian woman (all of those things are relevant here) including an insight into the crazy-fucked up world of Indian weddings (they put SAFETY PINS into HAIR - which also means HEAD). That's the stand out from the book for me, apparently, but like I say - insightful and funny and just very very good. I should also be reviewing this in full at some point, but this is me we're talking about so who knows?

Cheerful Weather for the Wedding by Julia Strachey - I found this book weirdly stressful? It's only a novella (see how hard I've been trying to get those 100 books in?!) but it's kind of based around all the hubbub of an English wedding in... a certain era (Idk, google it) and it's all bustling around and rushing and 'where's Jim' and 'What is Florence up to now?' and so on and I found it a bit exhausting? Amidst all of this there is a giant revelation, but by the time I got to it I was so exhausted I sort of... didn't care? Basically, it was all a bit much and now I need a lie down (much like, I imagine, the bride in this book).

Fantastic Beasts and Where to Find Them by JK Rowling - See what I mean about getting my numbers up! Is it worth reviewing a 'textbook' of magical creatures created for charity? Not really. But this was fine, but mostly worth a flick through for Harry and Ron's additions to the text and Dumbledore's foreword (I don't care for the Fantastic Beasts films, tbh).

King Lear: The Graphic Novel by William Shakespeare and Ilya - I haven't read any Shakespeare for ages, I thought. What could go wrong, I thought? I'm not going to say this was bad because, you know, it's Shakespeare, but I do have some notes because hello, I wrote my dissertation on Shakespeare in cartoons, this is *kind of* my thing. The front of the book and the art throughout presents Lear as a Native American chief, but, with the exception of Kent posing as his servant, there is literally nothing else to suggest that anything Native American is happening. As a king dispossessed of his lands, this comic could have done SO MUCH MORE on this theme, but instead it pretty much plops two native Americans in... Tudor England? It's really weirdly done, and it's frustrating because it could have been so impactful and effective had it actually referenced Native American history more.

But, you know. Read King Lear, it's really good.

Almost Midnight by Rainbow Rowell - Eeeeee! So I've been trying to read Midnights (one of the short stories in this book) for so long, but neither wanted to pay £10 for a teensy book (sorry, Rainbow) nor wanted to buy the collection of YA short stories it's in (sorry YA authors). Anyway, I borrowed this from my local library and I just SQUEEEEEEEE because it is so very cute! It's basically a short story over 4 (3? SORRY RAINBOW) New Years Eves and watching from afar and looks and squee squee squeeeeee you know?! The other story in the book, Kindred Spirits, I already own and have read a few times but of course I read it again because it's adorable and how can one person be so good at writing about blossoming love?! I don't know but she's great. SQUEEEEEEE.

The Road to Little Dribbling by Bill Bryson - Oh Bill, you belligerent old man. This book is a sequel of sorts to Notes from a Small Island, but it also is not that at all since, ya know, Britain has a lot of places to write about even if it's not that big (it isn't). I liked this plenty but (BUT) I found that Bryson kind of started to... grate on me a little bit. I think this is mostly because he's talking about my country (ooh, there's that patriotism I never had) but a lot of his complaints start to feel sort of classist and uncomfortable after a while, and I found myself thinking 'oh just let people do what they WANT' more than once. Having said that, it's still a pretty good travelogue because of course it is, and I do enjoy Bryson's joy and wonder at the beauty of this fine land *tears up a bit and starts singing the national anthem* excuse me a sec...

Bossypants by Tina Fey - That's right, I TRICKED you! This book is not in that photo because I listened to a whole audiobook (I know!) and well. WELL! This is also on my 30 before 30 book list thing (what isn't?!) and whilst I had read this, I had never listened to the audio and what a DIFFERENCE! I am in love and awe and yes, good. Good good good.

Excellent Women by Barbara Pym - It's rare for me to read a book that I immediately know would be perfect for someone else, but I knew about 3 pages into this book that Frances needed to read it, so it's ending up in her hands the next time I see her. As for me, I enjoyed this a whole lot - it's funny and good and the main character truly is an excellent woman (very funny) who DESERVES BETTER than all these men. I don't remember how that book made it into my house (did someone recommend?!) but I'm glad it did and I will be on the lookout for more Pym - for both Frances and me, I guess!

South and West by Joan Didion  - I snuck another slender read in just at the end of the month! This isn't so much a book as some diary entries and fragments of writing for a couple of articles Didion never wrote, but quite frankly, they could publish Joan's shopping lists and I would probably read them (they're probably FASCINATING, and insightfully written). So, yeah, of course this is good, it's Didion - some thoughts about the South and how she just wants to get the f out of there, and then some thoughts about her native California and her upbringing and all of that good stuff. Once again, it's Didion, which is all I really need to say, isn't it?

Ok, that was not brief AT ALL, and for this I apologise. I shall be back on Saturday for 24 hour readathon goodness (WHO ELSE IS READING?!) but I hope your March was fabulous and that you have an even better April. It is now officially my birthday month so I am here for treating myself super duper hard, and what better than an entire day of reading? Literally nothing, eh? Tell me all about your lives in the comments below pls!