Devouring Books: Stories I Only Tell My Friends by Rob Lowe 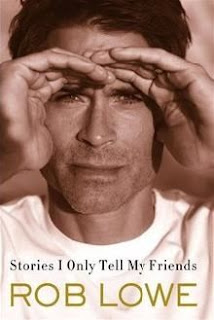 I was ridiculously excited when I found out (I think via twitter) that Rob Lowe was writing a book, I assume mainly because I think he actually is Sam Seabourn from The West Wing, and OH MY GOD, WHY ISN'T HE PRESIDENT YET?! But anyway, I thought that Sam Seabourn would have some interesting insights to make about the state of the world and politics and stuff like that, so I was ever so slightly disappointed to remember that Lowe is, in fact, an actor rather than an integral part of the President's inner circle. This disappointment ended, however, upon reading an autobiography that was extremely insightful, studded with stars, and reflective of a rather eventful life. And there's still (a lot of) space for a sequel!

It's always a little bit strange reviewing an autobiography because there really isn't anything in the story in itself that you can really criticise or question, unless you were there too (which I definitely wasn't), and even then you can't really argue with someone else's interpretation of events. So, instead of doing that, I'm just going to point out some things about the book that I noticed, and, probably, that I rather enjoyed! One of the things that was most apparent about the book was just how many famous names are dropped, and not in an overly obvious way either, but just literally in a way that said 'these are the people I grew up with. Deal with it.' And so there are tales of the Sheens down the street, losing a race to Dean Cain, and, my personal favourite, dating Cary Grant's daughter and meeting the great man himself! These names are just dropped so matter of factly that you just have to lament the fact that you didn't grow up with/around Rob Lowe, because maybe some of the star magic would have rubbed off on you, and you could be rich and famous too! The power of Malibu people, I've gotta say it seems like a kind of magical place...

The thing that really impressed me about this book is the amount of insight Lowe has into certain aspects of the 'movie star experience' (he doesn't call it that, I just couldn't think of a better way to put it!) One of the things that really interested me, because it is something that I have long thought about myself, is how fans completely lose their heads when they're around a famous person, and seem to find it more important to have been near the famous person than actually enjoying the moment at the time. This is something that Lowe, as someone who is actually interested in people, and getting to know things about them really can't fathom; how someone would want to come up to him, basically scream in his face, and then get him to scribble his autograph on a piece of paper like it means something, rather than having any kind of meaningful interaction with him, which he would actually prefer. This whole autograph hunting mentality is something that I've really never understood- to actually meet someone you idolise and all you get out of it is a scrawl on a piece of paper rather than a life experience you want to treasure? That's just a bit weird to me.

What Rob Lowe's autobiography does best is present a portrait of what it was like being in the cutthroat world of the 1980s film industry, being part of a group of bright young things, rising stars and all that stuff. What it seems to get you is a lot of insecurities, and a need to show that you are just as good, if not better than the rest of the guy's you're competing with. One of my favourite anecdotes from the autobiography comes during the making of Lowe's first movie, The Outsiders, when he tells Francis Ford Coppola how much he really loves The Godfather, and Coppola responds that, to him, the experience of The Godfather remains in the making of it; whereas now it's just like any other object, and really it belongs to the people. I found this concept so fascinating- that some great work of art you make can end up not belonging to you at all, but to the people who love it, and project parts of themselves onto it. In a way, it must be the greatest compliment your work can get, when it is something that ends up belonging to the people, and the best example I could think of for this is Harry Potter- doesn't everyone feel like it really belongs to them rather than to J K Rowling?

There were a few parts of Stories I Only Tell My Friends that I really just unashamedly loved, and for the sake of brevity I'm just going to blurt them all out to you. Firstly I loved that Lowe said that he loved Grease (I may have squealed a tiny bit at this), and that The Godfather 3 was truly awful (which, let's face it, it really is), and then there was this: "Charlie [Sheen] and I compete to see who can play harder and then show up to work and still kick ass. Verdict: Sheen, by a nose." When I read this, I instantly said, out loud, 'well, DUH' and then found myself really hilarious. But really, what else would one expect?! My actual favourite anecdote from the book though (forgetting about Coppola for a minute) is this one, which manages to be sort of hilarious and horrifying at the same time:


"My grandparents, square Republicans living in the tiny town of Sidney, Ohio, awaken one night to find three teenage girls standing over their bed. 'Is Rob Lowe here?' they ask- why they think I would be in my grandparents' bed under any circumstances is just one of the oddities of the evening."

AND he's funny! It's probably a side of Rob Lowe that a lot of people aren't that aware of (although his constant clumsiness as Sam Seabourn always makes me laugh!) but seriously, the dude's really funny, and smart and lovely, and I didn't know I could love him any more than I already did, but this book really just made me extra aware that, inside his incredibly good looking man suit, there is a pretty wonderful and smart spirit too. Yes I extra-love Rob Lowe now, is that a problem?!

The only slight issue I have with this autobiography, is just that there isn't quite enough said about his time on The West Wing, something which I was probably most interested to read about because of my obsession with the show. I was gratified to read that he had been following the careers of real life West Wing speechwriters since 1986 (!) and how strongly he felt that the part of Sam had been written for him, but on the whole there just wasn't enough meat to what he revealed about that time. My theory on this is that this leaves room for a follow up (Stories I don't even tell my friends, perhaps?), especially since there wasn't a lot of detail on much of his life post-sobreity and post-marriage, either. A lot more interesting insight to come? A girl can but hope!
Posted by Laura at 12:13