You guys, I have SO much admin to get through with you this week that I almost don't have time to tell you about my week! But in a teeny nutshell: work, work, work, work, Shakespeare exhibition that deserves its own paragraph and will get it below (Actually, it deserves its own POST, but I'm not going to write it so it never will get written) AND NaNoWriMo. NaNoWriMo, is, I guess, its own little administrative thing in a 'this is what I'm doing this month!' kind of way, and actually, you can just take this as a little sort of 'I'm maybe not going to read that much this month so I might not be here that much' thing. But don't worry, I'll still find the time to bore you on a Sunday with my LIFE and all.

So let's talk about Shakespeare, yes? There's been this exhibition at The British Museum (which I keep wittily calling The Stuff the British STOLE Museum, but no one as of yet has laughed because they're all disgusting Imperialists. So please tell me you laughed!) called Shakespeare: Staging the World, and although it was completely different to what I'd expected (specifically Shakespearey artefacts, which was kind of stupid of me since hardly any exist) it was also really really interesting. Like... It was about exploring the history of Shakespeare's time, through the backdrop of his plays, and kind of how current events influenced what he wrote about, and how his plays influenced current events. All just very very interesting and awesome, EXCEPT for the fucking 400 YEAR OLD EYE that for some reason they thought it was ok to include! I swear, I nearly threw up, because OH MY GOD THAT WAS SOMEONE'S EYE.

To say it's my one major memory of the whole exhibition would, in fact, be the complete truth. (A FUCKING EYE!)

Anyway... We need to move on from the eye thing, for it is Sunday and you probably have things to do and, well, I don't really but you know, we should move on anyway. Shall we get some admin done? I think we should. Don't worry, it won't be boring, I promise! 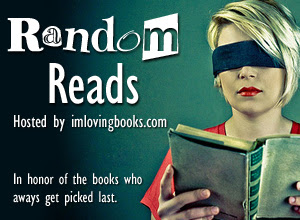 I've been hearing about this Random Reads thing for the last few months, and I think it's an awesome idea because 1) I hardly ever know what to read next, and can always use some help, and 2) I totally have a spreadsheet of all my books because I'm a NERD, but also because it's totally necessary since I have almost no bookshelves but various book locations, and it would be a NIGHTMARE if I didn't know where any of them were. I'd probably just end up reading To Kill A Mockingbird over and over and over again. So anyway, I did all the things I was supposed to, entered my numbers into random.org (click above to see how it works) and it gave me:

Small Island by Andrea Levy! Which I'm pretty excited about, because I remember Frances telling me all about it YEARS ago and it sounding really good, and because I've literally had it for years now. So yes, that, at least, is getting read. (Also, I'm desperately trying to finish The Audacity of Hope so I can review it on Tuesday and be all YAY OBAMA and try and get all you Americans to vote. It's going to be FUN!)

And then, also, remember when I did the RIP Challenge? Well, that's over now (Weep!) but, you know how the biggest challenge was to read 4 perilous books? Well... I sort of read more. Here's a handy little list of all the reviews for you if you want to check them out (you definitely do. Just so you know.)

Which, I might add, is the vast majority of books on this pile, and I think the rest are going to be put away now for next years challenge. Unless I really need to freak myself out, in which case, I'll know where they are!

Since the 'having a book pile' thing worked extremely well for RIP, I've decided to make a new one for things to read from now until the end of the year, and in doing this, to participate for the first time in Jenn's Monthly TBR meme: 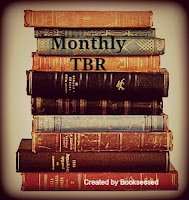 And HOPEFULLY this is going to be really useful in getting me to read my damn challenge books and win all the damn challenges, before I never do a challenge ever again because of the PRESSURE. SO anyway, here's the pile I've assembled: 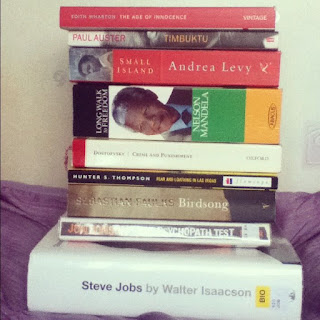 I think it looks doable over 2 months, but then I haven't included the three books I'm already reading, OR anything even remotely Christmassy. So we'll see. I really really want to get that Steve Jobs biography read though, because I've had it out of the library for LITERALLY about 4 months, which isn't good. Oh hey, should I list the books in the pile? I should, huh?! From the top:
The Age of Innocence by Edith Wharton
Timbuktu by Paul Auster
Small Island by Andrea Levy
Long Walk to Freedom by Nelson Mandela
Crime and Punishment by Fyodor Dostoevsky
Fear and Loathing in Las Vegas by Hunter S Thompson
Birdsong by Sebastian Faulks
The Psychopath Test by Jon Ronson
Steve Jobs by Walter Isaacson
I like the pile, I'm just not entirely convinced that it's going to happen. But WE SHALL SEE.

And hey, remember this?

A winner of the greatest book (The Woman in White by Wilkie Collins, in case anyone has forgotten) has been chosen, and it has been decreed that it is Jenna of Lost Generation Reader! Yay! She will be getting her book at some future time when I can be bothered to schlep my ass (and all other parts) to the Post Office. But anyway, future YAY!

Phew, that really was a lot of admin, huh? They're all things that I just had to get out there, and not in like 4 separate posts, and now it's all done and I won't have to bother you with them intermittently. I think that's better, anyway! I hope you've all had wonderful weeks, and that this coming one is EVEN better. Because I loves you all.
Posted by Laura at 10:17