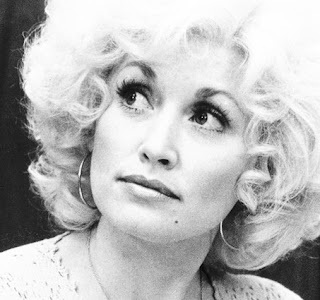 I started this post on Friday night and it's now Sunday afternoon where, of course, everything is different. But I'm going to cut and copy and paste and whatnot around this so that it kind of makes sense and I don't have to write a whole new post.

I've come to the conclusion that I shouldn't really be reading 3 books at once, because they will all never be read, and you, my poor poor readers, will have to wait for literally WEEKS for reviews. So maybe after I've read these three that I'm reading, I'll try for one at a time. Maybe. Or I'll just read more.

Anyway, that was a really good example of ramble thinking, wasn't it?! Deepest apologies. Let's see. The main thing I have to tell you today is that I went to see 9 to 5 at the theatre last night, and it was AWESOME, and Dolly was on film in this clock and that was EXCELLENT and I was just like THIS IS THE BEST THING DOLLY, I LOVE YOU! It was actually really unexpectedly fabulous because I had no idea what was going to happen, so I was completely surprised by the story, which was right up my alley! (I'm not going to tell you what happens, because what if you want to see it?! But it was really funny in ways that I wasn't expecting, and that you don't normally see onstage). And, I don't know if you know anything at all about 9 to 5, but Dolly wrote all the songs in it, plus she was in the movie which, I believe, was not a musical (although I could be wrong) and I basically love her more now than I ever have, which I didn't think was possible!

So, it was all feminist and awesome and I laughed LOADS, and the only drawback (which is a completely unfair one, so wait for it) is that in the original Broadway cast, ALLISON FREAKING JANNEY, who, by the way, I WORSHIP AND ADORE was Violet, who is sooort of the main character, and definitely one of the three main ones. Which is not to say that the woman who played Violet wasn't good, cause she was (her accent, actually reminded me of Allison Janney, and then made me go OH MY GOD SHE WAS IN THIS) it's just... Allison Janney! ALSO, 9 to 5 was totally playing when I was in New York in 2009, AND I remember being excited about it then even though I didn't really get what it was, so... Missed opportunities people! But I'm really glad that I saw it in one incarnation or another, anyway. DOLLYYYYY!

So, basically I need to procure myself a copy of 9 to 5 the movie and watch it, and I also need to watch The Best Little Whorehouse in Texas which I own, but I can't quite bring myself to watch it without Frances!! Which is sad but true.

I bet you want to know about the rest of my week, huh? Let's see... Work, work, work, still not figuring out how to do stuff before OR after work, not writing enough for NaNoWriMo, not reading enough for my mental health, and generally performing all tasks at a substandard level. But I totally still have viral tonsillitis (which means that it still hurts and there's nothing they can do about it) so I'm just like whateverrrr, I'm fine. So it's all good in the hood. Sorta.

I don't really have anything else for you, and it's already dark here, so mlumph is sort of an onomatopoeic representation of how I'm feeling at the moment. I'll try to be more interesting next week, but until then, have some Dolly and my love *gives you love*