Devouring Films: Out of Africa

Or, The Most Romantic Thing I've Ever Heard 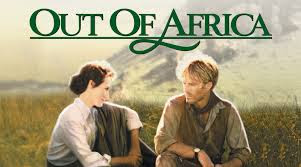 This isn't going to be strictly a review of Out of Africa, because I've seen it a grand total of once, and that was three and a half years ago(ish). What I'm saying is, I don't really remember much about it, apart from that there was this one character who said 'my waters have turned black' which made me HORRIFIED that such a disease could exist, and there was also a supremely awkward sex scene between Meryl Streep and Robert Redford that to this day can still make Frances and I giggle for AGES just at the mention of it.*

Anyway. The fact that I don't remember much about the story isn't important, because there's one more bit that I do remember and, as I have implied above, it's pretty much the most romantic thing I've ever heard. And it's not romantic in a disgusting, cutesy, annoying way, it's romantic in a way that appeals directly to me and my entire way of being. So, towards the end of the film, after Robert and Meryl have spent some time apart (don't ask me why, don't ask me if they end up together, I HAVE NO IDEA) he goes to see her, and he says:

Here's why this is so romantic to me: I love being alone. Being alone is pretty much my favourite state,  and much as there are other people I like (it's good to know I'm not a robot person, correct?) and much as I do like spending time with them, I do always need to spend some time alone after spending time with a lot of people because it's exhausting to me. I'm a classic introvert, is basically what I'm saying. So yeah, I like being with people, but I also like being alone, but to find someone I like so much that being alone would become an undesirable state? Well, I kind of want that.

There's also this love letter that Nathaniel Hawthorne wrote to his wife**, where he says, along similar lines,


"Thou art the only person in the world that ever was necessary to me. Other people have occasionally been more or less agreeable; but I think I was always more at ease alone than in anybody's company, till I knew thee. And now I am only myself when thou art within my reach."

I just... Isn't that the best thing ever? To be like 'hmm, people are ok' and then find a person who is necessary to you? Who becomes the one person you can't even imagine living without, and who changes you so that, instead of being happiest alone, you're happiest when they're near? I want that! Everyone wants that, I guess, but these are the two places where I've best heard it expressed, or at least that have stuck with me for the longest.

So, I don't really know if you should watch Out of Africa or not, but I do know the way I want to be in love someday. That's much better, right? Right.

*I tried really hard to find this sex scene for you on youtube, but it's not there. If you can find it, I commend you. And giggle.
**Of course I own a book called Love Letters of Great Men. Of COURSE it was a Sex and the City movie tie-in. I feel no shame about this!