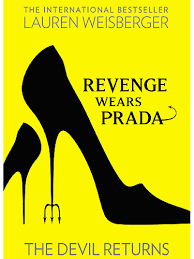 I can't remember whether I read the book or saw the movie first, but both versions of The Devil Wears Prada I like quite a lot. I mean... How can you not enjoy Meryl Streep acting like an utter bitch and looking amazing and being the best person in the world? (Also Anne Hathaway is good, too). The movie is awesome and the book is great because it has almost supplementary information that wasn't included in the film but really underlines how awful the whole experience of working for Anna Wintour Miranda Priestly must be.

Since reading The Devil Wears Prada, I've read a couple of Weisberger's other books (Everyone Worth Knowing, Chasing Harry Winston) and... I've been underwhelmed. They're fine, but fairly standard chick lit stuff, and it's hard not to think that maybe Weisberger is just better at fictionalising her own experiences* than she is at making stuff up. After reading Revenge Wears Prada, I'm pretty sure that is EXACTLY the case.

This book is really bad. I don't know if it's bad purely because Weisberger has taken Andy's character and completely fucked it up, or if it's actually bad, but I kind of hated reading it. Why did I carry on, I hear you cry? I think I thought, 'well, this can't be all there is to it' except that it was and suddenly it was the end of the book and I hated myself for reading it. It's honestly the worst sequel I've experienced since Sex and the City 2, and that movie is a fucking abomination.

Ok, so here's the story with this book- it's ten years after Andy quit her job at Vogue Runway and she's set up her own magazine, is marrying the man of her dreams and is best friends with her ex-colleague Emily for no apparent reason other than that Emily is a great character that Weisberger didn't want to get rid of. She's pretty much leading the life that you would have wanted for her and that should be awesome, only it's not because Andy is kind of terrible now. It's possible that she was always terrible and I just didn't realise it, but I don't think so...

Here's the deal- Andy is kind of whiny and complains a lot, when it doesn't really seem like she has anything to complain about. It's made eventually (sort of) clear that she's not as happy as she should be, but the woman is running a magazine, lives in Manhattan, and basically has everything anyone could want in life, and yet this whole book is like 'why is Miranda here where I am? Why doesn't my mother in law like me? Why does everything bad happen to meeeee?' and it's just like, dude, stop being a dick, no one wants to hear it.

I feel like some of this might be a perspective thing- in The Devil Wears Prada, Andy really was treated appallingly, so her whining was sort of justified and I sympathised with her. In Revenge Wears Prada, basically nothing bad happens to her and yet she still thinks it's ok to whine about everything all the time? That's just not cool. And if you lose sympathy for Andy, you lose pretty much all interest in the whole thing because it's just her. Sitting around and moaning. For a whole book.

I'm not exaggerating when I say that, either. There's some semblance of a storyline, but it feels like Weisberger found it really difficult to think of reasons for Miranda Priestly to appear in this story, and since she's really what this is all about, it was really disappointing. It's even more disappointing that she's not even that mean to anyone (that we know of) because the whole point of the Devil is that, you know, she's a massive bitch. I don't even get the title, really, because revenge is so not a part of this story- Andy doesn't get revenge on Miranda, and Miranda doesn't care enough about Andy to want revenge on her, and it's just ridiculous and stupid and I hate it. 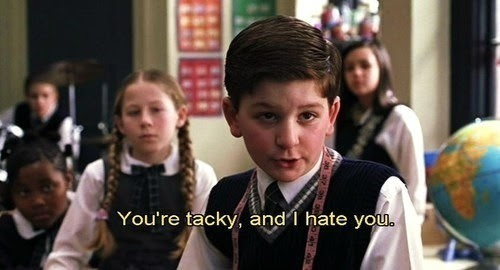 Basically, this is a sequel to a book that never needed a sequel. If it had been good in any way, it probably would have been fine, but it wasn't good in ANY way. It was so bad it's kind of sullied my memories of The Devil Wears Prada (the book, not the film) and I'm not sure I could ever read it again knowing what Andy is going to turn into. It's not pretty. If you haven't seen it, I totally recommend you watch The Devil Wears Prada, and you can even read the book! Just don't. Read. This.

*She was Anna Wintour's assistant at Vogue. I... don't know why I expected you to know that.
Posted by Laura at 11:23

Email ThisBlogThis!Share to TwitterShare to FacebookShare to Pinterest
Labels: UGH