Devouring Books: If You Lived Here You'd Be Perfect By Now by Robin Hardwick 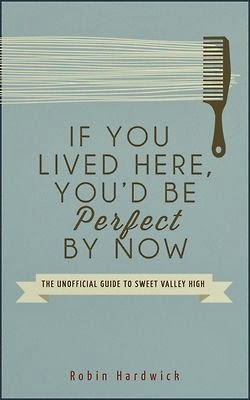 A long long time ago*, in an age before I knew what a book blog was, I stumbled across a number of blogs about both The Babysitters Club and Sweet Valley High, my ultimate childhood book series. These ranged from the mundane to the sublime, and of them all, the most sublime was The Dairi Burger, one woman's attempt to re-read the Sweet Valley High series of books and not go completely insane. I'm pretty sure I read most of the posts in one go upon discovery, because snark can be pretty awesome when it's done well. And this is done well.

So, If You Lived Here, You'd Be Perfect By Now (which I'm never typing out again because it's TOO long!) is pretty much the collection of posts from The Dairi Burger**, plus some extra book recaps and a few other bits too. I paid literally zero pence for it, which pretty much means it would be churlish of me to complain too much about it, but I do have a few things to say about it that I would have liked to have been better. But I can't be too cross about it like I would be if I'd paid, like, £10 for it. Which, to be fair, I probably wouldn't have done.

But first, the good stuff. If you've ever returned to Sweet Valley High as an adult (if, in fact, you ever read the books at all) you've probably noticed just how terrible they are. The writing is awful, the storylines are ridiculous, and characters who are naturally perfect at everything they try, as well as being so beautiful that they make others cry with jealousy are just, let's face it, annoying. This book appreciates that, and, in a book by book recap, goes through all the things that are wrong with, well, everything in the books. It's pretty awesome, I can't deny it.

So yeah, that's the kind of thing I'm into, and it's done pretty well, so I have no complaints about the book itself. I knew what I was getting, and that's pretty much what I got. NO REGRETS. But, some complaints, actually.

First, the formatting. I'm not sure exactly how Kindle books work, or how difficult it is to format them, but it would have been really cool if there had been a menu or contents thing or whatever where you could skip from one book to another on a whim: like, you could think, "I want to read a snarky interpretation of the book where Regina dies" and BAM you're there, instead of having to go through alllll the books. This is probably a spoilt brat thing because you can do this on the blog, so it's not that big of a deal.

The other thing, though, is that, well, it kind of gets a bit samey after a while. And I don't mean, you're reading snark so it gets samey, it's that it seems like Hardwick is criticising the same things about different books. Which, I get, because firstly, the same things happen in the books, so there's a limit to how much you can say about them, but also, she wrote the posts out of sync (i.e. didn't read book 1 then 2 then 3 and so on) so these criticisms probably happened months apart but just happen to have been valid criticisms of books that came after each other.

But (and here's my really big one) this is a problem that could have easily been solved with some gentle editing, and honestly, at times it felt like no editing had happened at all. There were spelling and grammar mistakes that you kind of let slide in blog posts because eh, people will read them and forget them in about a day, but when you're writing a book (even if it is self-published)? I feel like that's something you sort out. It seemed a bit like she'd just taken the blog posts, not even read through them, and plonked them into a book format. And it annoyed the crap out of me. Not in general! I don't mind that she used her blog posts at all, because that's basically what this book was for, but it did annoy me that she didn't seem to have read through them to weed out even the most basic mistakes. None of them! Not at all!

So, editing-wise, this book just annoyed me, but content-wise, I'm never going to not find criticisms of Sweet Valley High hilarious. It's fun to make fun of the person you used to be, and of the things you used to be impressed by, and kind of important that you don't necessarily continue to revere things that actually seem quite damaging now. Basically, if you ever read Sweet Valley High, you're going to get some laughs out of this, and if you didn't... Then your childhood reading was probably better than mine.***

*Like, 4 years ago, maybe?
**Which, in case you didn't know, was totally the cool hangout for SVH students, where they could chow down on burgers whilst retaining their size six figures.
***It definitely wasn't. Sweet Valley High RULES.
Posted by Laura at 08:30