In an attempt to actually achieve some goals and whatnot (as well as having actual things to write about here) I'm recording some of my 27 Before 28 List achievements before my next birthday. You can see the original list here, marvel at its splendour. 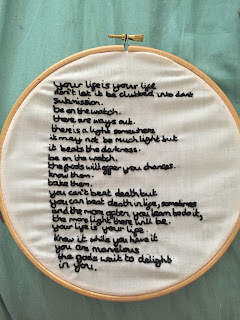 Once upon a time, when I was feeling low, I was browsing through Tumblr and came across a tattoo on basically my favourite Tumblr, The Word Made Flesh. This particular tattoo was a couple of mins from Bukowski's A Lighthouse of Words, and included within the post was the full poem. I read it, and immediately began to cry because it was exactly what I needed to read, and remains the exact thing I need to read whenever I start to feel low, or sad, or basically at most points in my life.

I'm not entirely sure what possessed me to embroider the poem, except that I knew I wanted to display it in my room somewhere and I'm not all that great at drawing or even writing all that prettily, so at the time embroidery seemed like the best way to put my own personal touch on it as well as, y'know, giving me something to occupy myself. Occupy me it did, and although I worked like a fiend on it for a couple of days, it took a further 3 or so months to actually embroider the last 4 or 5 lines, mainly because I knew I had to re-draw them on and frankly, that felt like the most work of all.

However, it's done now, and I just have to figure out where to hang it, so that I can have a constant reminder that no matter how bad things seem, they're going to get better. I promise it, and Bukowski does too, in a much more eloquent way.
Posted by Laura at 09:00