RIP XI Book I: The Silence of the Lambs by Thomas Harris 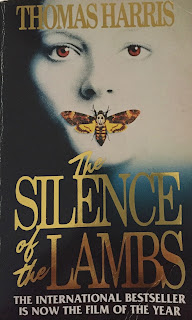 I'm doing a couple of things with this review: trying to get RIP off to a roaring start by actually reviewing the things I read for it in a timely manner (I finished the book about half an hour ago) and undoing a wrong of last year. See, last August, in the midst of dissertation fever (TM), I watched Silence of the Lambs under the pretext of it being useful to my dissertation (it wasn't, but I did mention it briefly so it's fine) but mainly because I needed the break. And oh my god. I actually truly believed I had written a review of it here but obviously I didn't, but it is SO. GOOD. I didn't expect it to be very good at all because it's too well known in popular culture in a really shallow way, but actually it's an incredibly gripping and feminist and excellent film and I can't even really cope with how good it is, or how much I did not regret losing those couple of hours of dissertation writing.

And so. Just about a year later, I decided to read the book.  I've had it for a really long time, but the cover is so crappy and it just never looked appealing to read, without knowing it was one of the most compelling thrillers I've ever experienced, in both film and book formats.

Here's the thing with seeing the film first. The book is basically the film, only without some of Hannibal Lecter's snappier lines (thanks, Hollywood!) AND without the excellently atmospheric creepy music that the film has going on. The ending is also slightly different (surprise surprise, I liked the film's ending better) but for all intents and purposes, they're essentially the same thing. The Silence of the Lambs is a thriller above all else, so it's not like a lot of other books, where reading them gives a greater insight into the characters heads, it's pretty much told as you would see it, which isn't a bad thing, just a thing that helps make the film super accurate.

Does that mean you shouldn't read the book? Well, did I mention how much I love the film? Because reading the book is like that, only you can take it places with you and not use up your data reading it because, you know, it's a book. I'm not going to pretend I didn't cast Jodie Foster as Clarice Starling, or Anthony Hopkins as Hannibal Lecter (who is, in spite of what you might expect, not the main character of this at all, it's all about my girl Clarice) in my brain, but it's still such a good read that I didn't want to stop reading even though I knew what was going to happen. Is that enough of an endorsement or not?

I don't want to say too much about the plot, not only because I'm not much of a reviewer, but also because I went into the film knowing basically 'Hannibal Lecter is a cannibal' and got so much more than I bargained for, and whether you start with the film or the book, I want you to have the same experience. Here is what I will say- although I said it's pretty much a straightforward thriller, it deals with issues such as women in law enforcement roles (FEMINISM) and transsexualism and grief and psychopathy in delicate and interesting ways and that helps put it above other books in its genre that are basically focused on plot only. Unless I am remembering the film wrong, the book also has an advantage over it in that it gives Clarice a girl friend (as opposed to a girlfriend) who supports and scolds her, and manages to pass the Bechdel test in that sense as the film does not (again, unless I'm remembering it wrong and Clarice's awesome friend is in the film too). Harris manages to sneak a female friendship in amongst all the gruesome stuff, and for that, I kind of love him.

So. You can read the book first or you can watch the film first, or you can just pick one of them, but if you don't do either, you'll be missing out on not only an important pop culture touchstone, but also what I'm going to go out on a limb and say is basically one of my favourite stories. Out of all the stories. Is that a good enough endorsement or what?