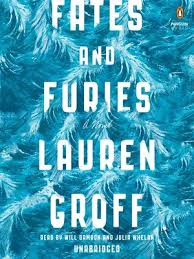 Oh my, this book. I have only read one other Lauren Groff book before (Arcadia) which, apparently, I really liked at the time but now have only the most fleeting memories of. Fates and Furies, I feel, is going to stick with me for quite a while, and I loved it so much that I have even kept it which, believe me, doesn't happen so much anymore with books I have just read.

Whyyyy is this book so awesome though, I hear you cry? So many reasons, I respond. It is structurally so perfect that I can't even with it - it opens up on a couple, nameless, newly married and newly in love, and then follows them throughout the rest of their lives. It follows him, initially and interestingly, and just when you think Groff has forgotten about her, BOOM, the narrative opens up and we get the other side of their marriage, literally the other half if you will, and see that things are not exactly as they had seemed, but also at the same time, they are both exactly as he saw them, and exactly as she saw them, because both realities exist at the same time.

Ahem, sorry. Got a little philosophical right there.

I know that I am not exactly the best at writing descriptive book reviews, or, lately, at writing book reviews at all, but this book really makes me want to say nothing at all descriptive about the story because it all unfolds so beautifully that sharing my knowledge of both parts of the book makes me worried that I will reveal something that you really shouldn't know until the end. It is a story of mysteries, even though you didn't realise that was the case, and it is the story of a marriage as told from both sides - one of them slightly wide-eyed and in love with the world, one of them more careful and pragmatic, who has already seen the world for what it can be sometimes, darker and scarier and much less friendly than their partner thinks.

I wasn't expecting as much from this book as I got, and even during the first half of the book, I wasn't expecting what I got from it. This isn't to say that the first half is worst than the second (it's ALL AMAZING, in case that wasn't clear) but that the second half resolves and explains things from the first that I didn't realise I needed resolving and explaining, until I did. I read a lot of this book on trains (I went a lot of places in August!) and it made the journeys fly by - in fact, I didn't really want them to end, so I could stay on the train and read my damn book. If that's not the mark of a good book, then I've completely misunderstood the point of reading, I think.

And that, without giving anything about plot away at all, is that. It's got to be one of my favourite books of the year so far, if not my ultimate overall favourite - please read it, and if you have already, please tell me what you thought about it in the comments!
Posted by Laura at 08:00