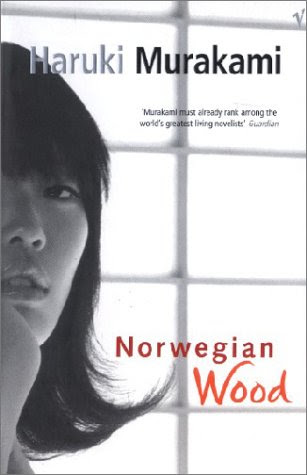 Well, I was relatively underwhelmed by these chapters of Norwegian Wood, which probably means that everyone else LOVED them based on the evidence of the last two weeks! By 'relatively', of course, I mean that I still liked them, but maybe not as much as the rest of the book so far, and that may just have been because there wasn't really a cohesiveness between any of them, like there was with the last two sections. These chapters still had their moments though, and obviously that's what I'm going to talk about today!

So Midori's back, which I think is something we all wanted, only this time we find out that she's a liar, and her life is kind of depressing. Which, you know, is all like *sigh* and *groan* and stuff, ONLY Midori deals with the extreme pressures of her life with a good deal of grace, and large amounts of alcohol. I kind of respect her for this, for carrying on in spite of her dad being all terminally ill and stuff, whereas Naoko has just generally given up when bad things have happened to her. I don't really mean to compare the two, because I happen to know that you can't really control depression or the effect it has on you, but I think it's kind of important to compare them simply because Murakami sort of has- he throws them together in this story, and then it's up to us to see the complete difference between them. It's really difficult, then, not to admire Midori that much more, for having the mental strength to deal with the kind of things that would seriously be beyond Naoko.

And hey, can we just talk about Midori's dad for a second? Because I sort of love him because Toru sort of likes him, and he's not the kind of person to like others easily. The whole cucumber thing was sweet, only I have to assume that Japanese cucumbers aren't the same as English cucumbers because, well, I'm not sure you would or could eat a whole one in one go. I mean, I would because I bloody love cucumber, but it's not necessarily advisable. I should probably move on from the cucumber thing before I start saying something wholly obvious, but really, it just baffled me! Let's talk about what Toru says to the barely conscious man when he's left alone with him:


"What marks [Eurpides'] plays is the way things get so mixed up the characters are trapped. Do you see what I mean? Lots of different people appear, and they all have their own situations and reasons and excuses, and each one is pursuing his or her own idea of justice and happiness. As a result, nobody can do anything."

Random piece of information? Or some kind of parable about something, like the way Toru lives his life? Who can say?

I loved Toru in this section though. Really really loved. He still doesn't know what the hell he's doing, bless him, and when things get rough he wants to return to the retreat (shocking!), but on the other hand, he gave Midori some much needed breathing space by looking after her dying father, he accompanies Hatsumi home and doesn't try any funny business after Nagasawa's been an asshole to her (more on that later); and he's just generally an all round good guy. This is all combined with a new piece of knowledge about him, that he does at least have some awareness of his own depression and problems, as he writes to Naoko:


"It's because I think of you when I'm in bed in the morning that I can wind my spring and tell myself that I have to live another good day. I know I have to give it my best here just as you are doing there."

I think this acceptance of his issues alone makes him a much more appealing character, just because it sometimes seems that he thinks he's ok, especially compared to Naoko, and this shows an acceptance that it really isn't. 'Winding one's spring' sounds like exactly the thing you have to do with depression, just to do absolutely anything, and being able to do it is one of the hardest things in the world. The fact that Toru can, except on Sundays, is such a good sign, and the fact that Naoko gives him the strength to do so shows just how important she is to him.

And, oh, poor Hatsumi! I think we all knew that Nagasawa was a complete dick, but chapter 8 really just reinforced that point to the ultimate level. I don't even like Hatsumi that much, but at the same time I really really didn't like the way Nagasawa treated her, and nor did I want her to be the (third? fourth?) suicide in the book. I mean, really- I want to beat him and tell him to treat her better, and at the same time shake her and tell her to find someone better who isn't, essentially, a psychopath. And while I felt all these feelings, I also kind of thought they were sort of apart from the main flow of the narrative, and I could sort of done without it, unless, maybe, the point was that these are the friends he has to replace Kizuki and Naoko, and really, they don't measure up.

I just have one more thing to mention, and it's one of my absolute pet peeves- Murakami perpetuates the really really annoying and boring and cliched assumption that when women get their periods, they go insane. I can't even remember the exact circumstances here (did Midori get her period and then turn into an uber uber bitch or something?) but this kind of thing, in any situation just makes me roll my eyes and then want to stab something. Because really. Yes, sometimes, some women can get a bit grumpy or emotional or whatever, but it's by no means a universal thing, or even an every month thing for the same woman. HAVING A WOMB AND OVARIES DOES NOT MAKE ONE INSANE! Is that clear enough, every man writer ever?

Anyway. So, yeah, liked but didn't love, probably because there wasn't enough depression since Toru is discovering more things about himself and was kept away from Naoko for the whole three chapters. Nonetheless, I do want Toru to be happy, and since he's making steps towards normality, I'm optimistic for that happening in the final two chapters. I mean, he even quipped at Midori! "'[My sister] has this really conservative streak.' 'She's relatively normal, you mean?'" Teehee. Oh Toru. Keep on winding your spring darling, I think you're going to be fine.
Posted by Laura at 14:55