Yes indeed, Yorkshire was my mystery destination from last week's Sunday Sundries (which you'd know if you followed me on twitter. Hey, why not do that?), specifically Oxenhope, which is basically right next to Haworth which, I'm sure you know, is where the Brontes lived! Clearly my sister knows the things I like, cause she's the awesomest (until we have an argument, that is, and then she won't be. You know, siblings!) But Haworth! It was amazing! And so pretty! And obviously warrants it's own special post about a literary landmark, so I'll save the story until I can be bothered to write that, and leave you for now with the creepiest statue in the world: 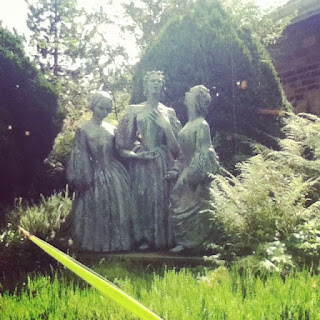 That was just the first day, and then on the second day we went to York and it's a pretty nice city, plus it has York Minster and, you probably don't know this about me, but I'm a real sucker for Cathedrals and shit. Not God or any of that, but the buildings themselves? Amazing. So there was that, PLUS this chocolate tour thing because York was the home of Rowntrees (who originally made Kit Kats and Smarties and Fruit Pastilles and all) as well as Terry's (of the chocolate orange) and that was pretty awesome too- I learnt how to taste chocolate properly and everything, so now I consider myself an expert. Oh, and obviously it rained loads too, because I was in Yorkshire for goodness sakes! 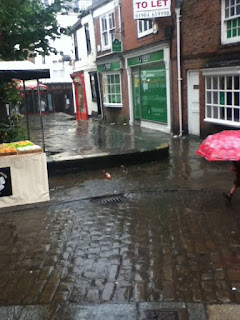 Interestingly, York also seems to have been a breeding ground for criminals and apparently a good place for their final burials. Guy Fawkes was born there, and I wouldn't have brought this whole thing up if I hadn't gone on the bus tour of York that basically only gave information like 'This is where Dick Turpin was buried, and this is where he was hanged. Public executions used to take place over there' and so on. I found all of this mightily disturbing, of course, especially after all the lovely chocolate mere minutes before! Bad bus tour.

Then we just had a morning left in Yorkshire, and so we went tramping around the moors which was EXCELLENT and also TIRING (those hills are STEEP!) and so beautiful that I could actually just cry thinking about them now.  Honestly, I can't even overstate how amazing the moors are- it's like every direction you turn, the scenery is even more beautiful. And it's actually really difficult to get a good picture of how lovely it is to be there, because each picture is just one side of your experience, whereas the moors are ALL AROUND. It's amazing. And makes me just want to read all the Brontes books all the time. 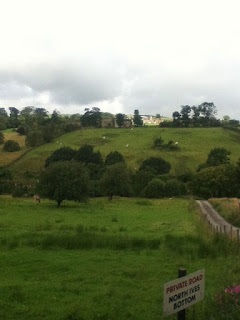 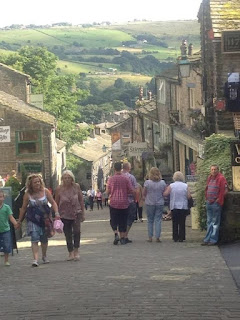 And what this all means, now, is that I have to stop making fun of the North, and of Yorkshire, and that's going to be REALLY difficult for me because I've been doing it forever. But NO MORE, I say! Because seriously, I love Yorkshire so much!

Inevitably, though, we had to come home, and I haven't really done anything since then except mope around because I don't live in an area of stunning natural beauty and because I miss Yorkshire. Which I'm going to have to get over because I definitely can't move there, and definitely not right now, but still... Yorkshire, you have my heart right now. Having said that, I did buy some pretty awesome boots on Friday, and baked muffins on Saturday, so maybe here isn't quite so bad after all. Maybe.

Book-wise, I'm in that awkward place where I'm between books (I've finished The Moonstone and it's BRILL- so excited to discuss it on Wednesday!) and I haven't quiite decided what to read next. Foolishly yesterday I got about 50 pages into Dolores Clairborne, but I got to a good stopping place (it's basically a giant monologue with no chapters, FUCK YOU KING) and so stopped, but when I wanted to read some more I picked up Crime and Punishment instead, so now I'm a chapter into that. And like 3 other books as well. BASICALLY I'm having an attack of ADHD, or, you know, inability to just pick one fucking book. It's like a disease.

That was also my way of telling you that I have no content! None! Apart from a review of Let's Pretend This Never Happened that I haven't written yet, and also one for this documentary that made me cry a bit. But other than that, nothing! This is you chance to tell me that you miss me posting every day... Guys? Guys? Hmmm... I'll remember this...